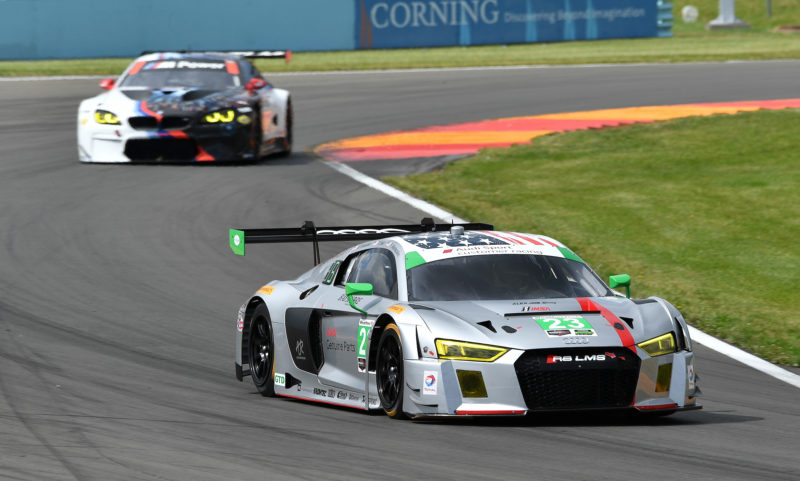 The AJR team overcame multiple challenges throughout the weekend including a gearbox retirement on Saturday and multiple tire punctures during the race.

“We just finished the weekend at Watkins Glen. It was great to be back with the Alex Job Racing team and to race alongside Townsend and Bill,” stated Montecalvo.

“The morning warm up before the race was essentially our first practice. We had a couple of issues early on in the week, which we think were coming from the differential going bad. On Saturday the gearbox blew up in qualifying, so that really set us back too.”

“The morning warm up went well for us. However, I had to use those few laps to get up to speed in the car before the race. Townsend started for us and had a good start moving up a couple positions in class. Bill had a solid stint after Townsend, and then I did a triple stint in the middle of the race.”

“It was a really long run for me, but I figured out what the car liked, and by the end of the race the three of us were all running a really good pace.  Unfortunately we had a tire blow out in one of Townsend’s stints, so that dropped us down a couple laps, so it was hard to come back from that.  All and all it was an okay weekend. We just need to take what we learned and move forward for Petit Le Mans in October.”

The final round of the Tequila Patron North American Endurance Cup Championship is the Petit Le Mans at Road Atlanta on October 7. Be sure to follow Frankie on Facebook, Twitter and Instagram to stay up to date with all of his racing news this summer!