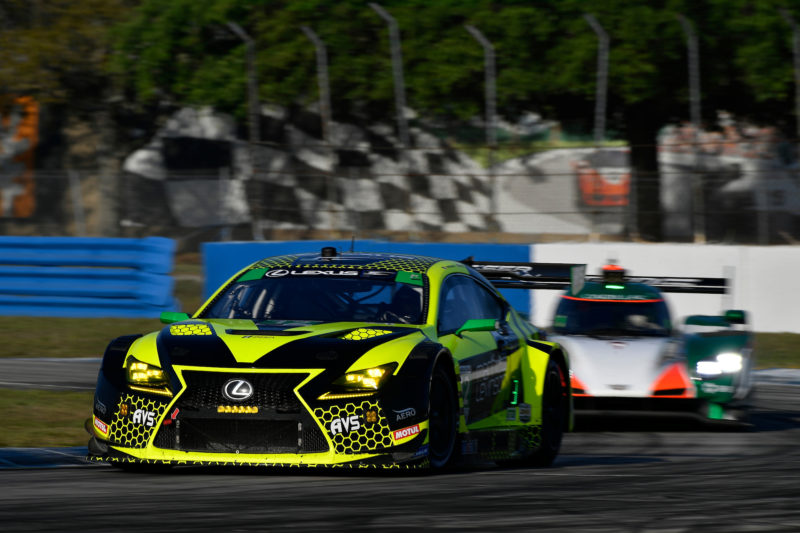 Montecalvo qualified the No. 12 Lexus RC F GT3 eighth in class for Saturday’s race.  Late Friday evening, heavy rain moved into the Sebring area and did move through until several hours after the race began. Because the rain was so heavy, the 12 Hours of Sebring began under a full course yellow, behind the safety car.

“They definitely made the right call to start the race behind the safety car under a full course yellow. The spray from the other cars obviously made it hard to see, but the standing water on track was what really made it tough to stay on track and out of trouble,” explained Montecalvo.

The green flag finally flew after 30 minutes behind the safety car. The rain would continue throughout Montecalvo’s first stint, and the conditions were variable throughout the day. Even in the adverse conditions, Montecalvo, Bell, and Telitz were able to maintain a top ten position and bring home more points towards the championship.

“We’re happy to come away from Sebring with more points for our championship run. We would have liked to have finished higher than P9, but at a race like the 12 Hours of Sebring, it’s a victory in itself just to finish.”

“I can’t thank the AIM Vasser Sullivan team enough for a solid weekend as well as Townsend and Aaron for doing a great job behind the wheel. We learned a lot about the car and the tires over the weekend, and we’ll take all of that information and apply it towards Mid Ohio. We saw last year that Mid Ohio was a great track for the Lexus, and we’re hoping for another podium finish there in May.”

Frankie’s next race will be held at the Mid-Ohio Sports Car Course on May 5. Be sure to follow Frankie on Facebook and Twitter to stay up to date with current broadcast times as well as all of his racing news.