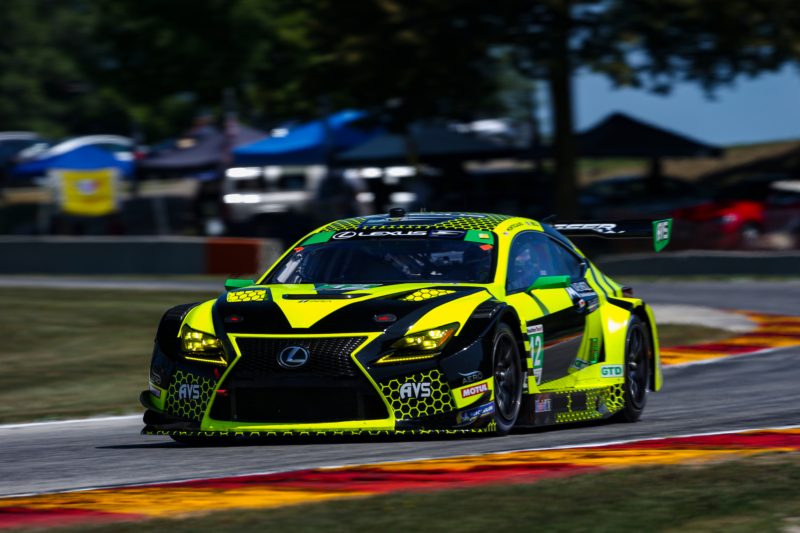 Montecalvo qualified the No. 12 Lexus RC F GT3 fourteenth in class after their qualifying session was cut short due to lightning in the area when Montecalvo was on a flying lap. When the green flag flew on Sunday, Montecalvo quickly made up three positions on the opening lap and would eventually work his way up into the top ten before handing the car over to Bell.

Bell was able to pick off a few other cars and found himself as high as P7 but would eventually finish P9. Montecalvo and Bell gained valuable points towards the championship and currently sit fifth in class, with only eleven points separating the duo from second place.

“It’s always great to race at Road America, and this weekend was no exception. Once again, the AVS team did a phenomenal job to give Townsend and I a great car, and I’m pleased to come away from the weekend with more points towards our championship hunt,” stated Montecalvo.

“Unfortunately, our qualifying session ended early because of severe weather in the area, so we never got to complete a proper lap, and we qualified P14.  After the session, we found some areas where we could make improvements to the car, and we were able to test them during the twenty-minute morning warm-up on Sunday.”

“The changes we made greatly improved the car, and I felt confident that we would be able to make our way through the field and into the top ten once the race started. On the first lap, I was able to pick off three cars and eventually work my way up to tenth before handing the car over to Townsend. He did a great job picking off more cars and worked his way up to seventh, but we would ultimately finish P9.”

“I’m grateful for another top ten finish and points towards our championship. It was unlucky that our qualifying session was cut short, but overall, we learned a lot about the car over the weekend, and we will take that data to VIR and come back even stronger. We had a productive test day at VIR a few weeks ago, so I feel sure that we will have a really strong race weekend there in three weeks.”

The next race for Frankie and Townsend is the Michelin GT Challenge at VIR on August 23 – 25. Be sure to follow Frankie on Facebook and Twitter to stay up to date with current broadcast times as well as all of Frankie’s racing news.