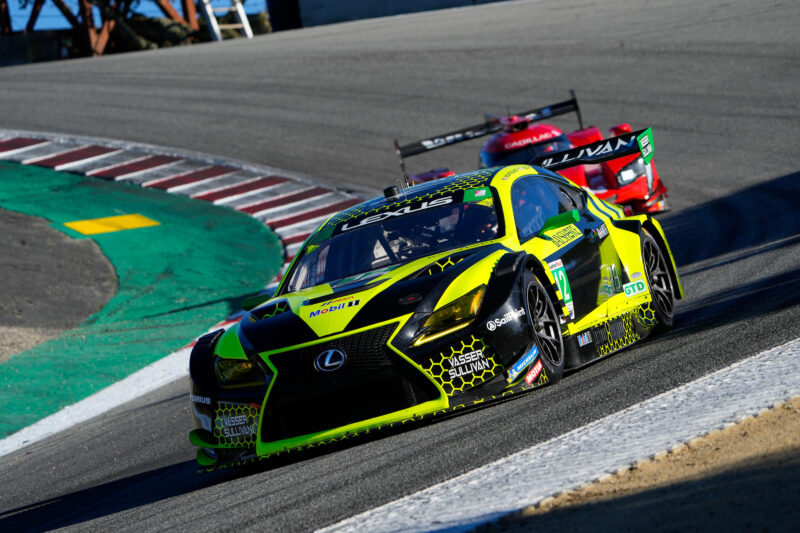 Montecalvo qualified their No. 12 Lexus RC F GT3 ninth in class for the start of Sunday’s 2 hours and 40 minutes sprint race. Before handing the car over to Veach to finish the race, Montecalvo was hit by one of the prototypes causing damage to their Lexus which would ultimately hamper their overall pace.

“It’s always great to be back at Laguna Seca, but it has always been a circuit that is very tricky to get a proper set up for the car,” said Montecalvo.

“I qualified our Lexus ninth in class and had a clean start. Unfortunately, midway through my stint, I was hit by one of the P2 cars. I dropped a few positions in the running order but was able to work mt way to tenth in class.”

“When I handed the car over to Zach, he did a great job of maintaining our position in the top ten and ran as fast as possible with the damage we had sustained from the earlier hit.”

“Ultimately, we finished P10 in class. It wasn’t where we wanted to finish, but we’ll take what we learned from the weekend and apply it towards our next races. I can’t thank Lexus and the Vasser Sullivan team enough for all of their hard work throughout the weekend.”

“Now we’ll take a week off and focus forward to the next event at Long Beach. I love running street courses, and I think we have a great shot at a podium finish in Southern California in two weeks.”

The next event for Montecalvo will be the Long Beach Grand Prix in Long Beach, California. On track action begins Friday, September 24, and the race will take place on Saturday, September 25. You can watch the entire 100-minute street race on NBC Sports on Saturday beginning at 5:00 PM ET. Be sure to follow Frankie on Facebook and Twitter to keep up with current broadcast times and all of Frankie’s exciting racing news.