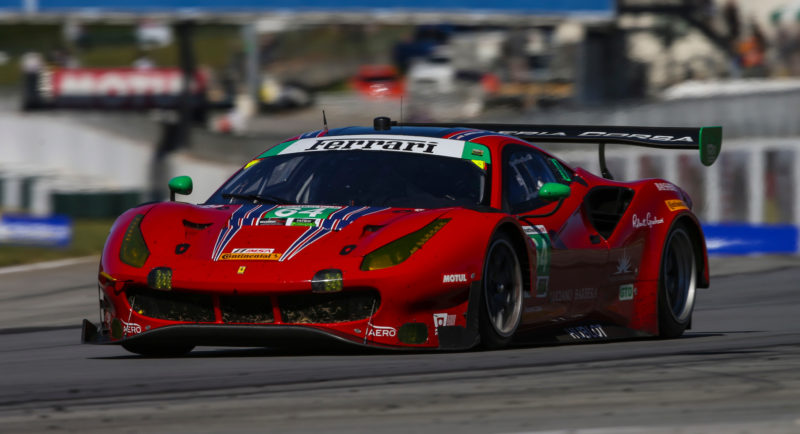 The trio started the enduro from seventh in class and ran a nearly flawless race. The Scuderia Corsa team executed perfect pit stops and excellent strategy calls to maximize their position on track with the multiple yellow flag periods that the 10-hour endurance race saw.  They fought their way into the top three positions, but would eventually finish fifth in class, marking their second top-five finish for the 2018 WeatherTech Sportscar Championship.

“It was a really nice way to end the season with a top five finish. All of the drivers and crew did a phenomenal job to give us a car that was really competitive and even leading the race at one point,” said Montecalvo.

“I had some early contact when a prototype car drove into the right front of my car on the front straight when I was racing for position with another car. I basically got sandwiched between the prototype and another GTD car. I was able to recover, but we did have some wheel damage to the right front.”

“The contact resulted in a lengthy yellow as the car I was racing for position sustained a lot of damage. We had pitted fairly recently before the incident, but because of the wheel damage, we changed our strategy a bit and pitted again to fix the wheel and make sure everything else was okay with the car.”

“After that, we had really great pace, and Townsend and Matteo both did an incredible job to keep the car out of trouble and made up several positions. The end of the race was a little frustrating for us, but to finish the season with a top five at Petit Le Mans is a great accomplishment that I’m very proud of. I have to give a huge thank you to my teammates and the entire Scuderia Corsa team for an awesome season, and I’m extremely grateful to have been a part of such a great team for the 2018 season.”

Montecalvo will be busy during the off season months with his various roles at his family’s recycling business in Keasbey, New Jersey – Bayshore Recycling. He will also be working on his 2019 racing plans in the coming months.  Be sure to stay tuned to Facebook and Twitter to stay up to date with Frankie and his 2019 racing plans.