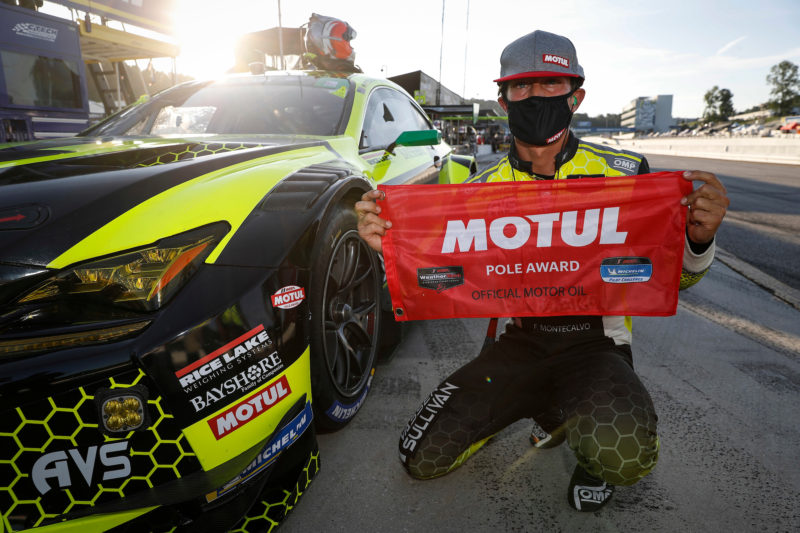 Montecalvo qualified the No. 12 Lexus RC F GT3 on pole, claiming his second pole position of the season. The start of the race was chaotic and saw multiple prototype cars spin at the start/finish line in front of the GT classes. Montecalvo was able to avoid the mayhem and stay within the top three GTD cars throughout his two-hour stint.

“The weekend started out really well with a pole position. It was an extremely great lap that put us at the top. It didn’t come easy, but I was really happy to put together a perfect lap that gave us the front row start,” said Montecalvo.

“The start of the race was crazy. I felt like during each of my stints my main job was to avoid other competitors’ spins or crashes. I wanted to be able to give Townsend and Aaron the best car possible, but there was a lot going on during my stints that I had to avoid.”

“The crew did a phenomenal job in each of the pit stops. The strategy was perfect. Aaron and Townsend had exceptional stints. We were flat out for the entire six hours, but in the end, we just didn’t have the all-out pace to get us back to the podium. This was probably the hardest fifth place finish that I’ve ever had to fight for, but it just shows how competitive our GTD field is.”

“I would have loved to have come away with another podium finish, but I’m very happy with a top five finish. The team never put a foot wrong throughout the entire weekend, so I cannot thank the AIM Vasser Sullivan team and Lexus Racing enough for such a great weekend.”

“We have two weeks off and then we head back to Mid-Ohio. We know the Lexus is very competitive at this track, so we’ll be pushing as hard as we can for maximum points as we enter the second half of the season.”

The next race will be at Mid Ohio on Sunday, September 27, beginning at 2:10 PM ET.  Be sure to follow Frankie on Facebook and Twitter to stay up to date with current broadcast times, networks, and all of Frankie’s racing news.