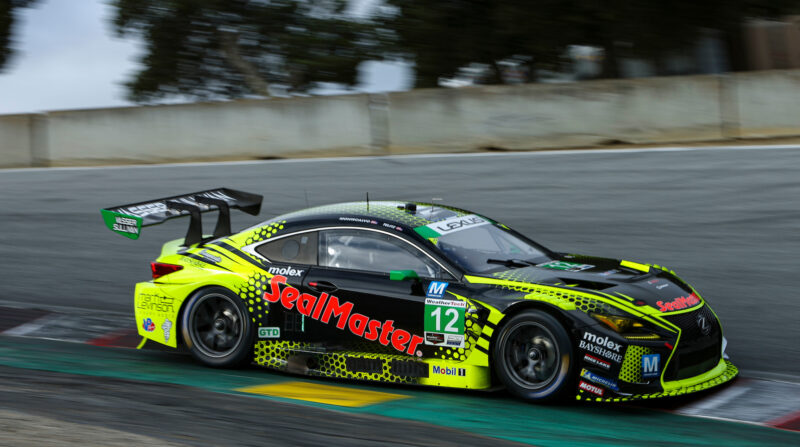 Montecalvo qualified the No. 12 Lexus RC F GT3 ninth in class, but the team made a strategic decision to start the race on new tires. As a result, the No. 12 Lexus was sent to the back of the field, and they would also need to serve a drive through penalty after the start of the race. Although Montecalvo and Telitz were able to make their way through the field, they would ultimately finish P8 in class.

“It was great to get back to Laguna Seca for the fourth round of the IMSA WeatherTech Championship. The team has made phenomenal progress with the car, and it showed in the practice sessions leading up to qualifying,” said Montecalvo.

“We finished practice P2 in class and made a few adjustments to the car before qualifying. Unfortunately, those changes did not yield the results we hoped for, and we qualified P9 in class.”

“We decided to change to sticker tires for the start of the race, which sent us to the back of the pack. We hoped that we would be able to preserve the tires and make up a significant amount of time at the end of the stint. However, we also had to serve a drive through penalty for changing tires.”

“If we didn’t have to serve the 25-second pit lane drive through penalty, it would have been the right call, but unfortunately, it didn’t work out for us this weekend. We still showed that the Lexus had great pace at Laguna Seca, as we were able to work our way back through the field.”

“Aaron and I made some great passes and kept the car clean. Aaron had a fantastic stint and got us into the sixth position, but with the track surface being so abrasive, we struggled to hold on to the tires at the end of the stint. In the end, we finished P8 in class.”

“The team made excellent strategy calls and executed flawless pit stops during the race. We’ve made so much progress with the car, and this weekend was our best team finish at Laguna Seca collectively, which has historically been a difficult circuit for us.”

“I’ve said it before, but each weekend this team continues to get better and better, and I’m extremely proud of everyone at Vasser Sullivan and Lexus for all their hard work each weekend. I’m looking forward to getting back to the track in just under two weeks’ time for the Lexus Grand Prix at Mid-Ohio.”

The next event for Montecalvo is the Lexus Grand Prix at Mid-Ohio on Sunday, May 15th. To stay up to date with current broadcast time and all of Frankie’s racing news, be sure to follow him on Facebook and Twitter.