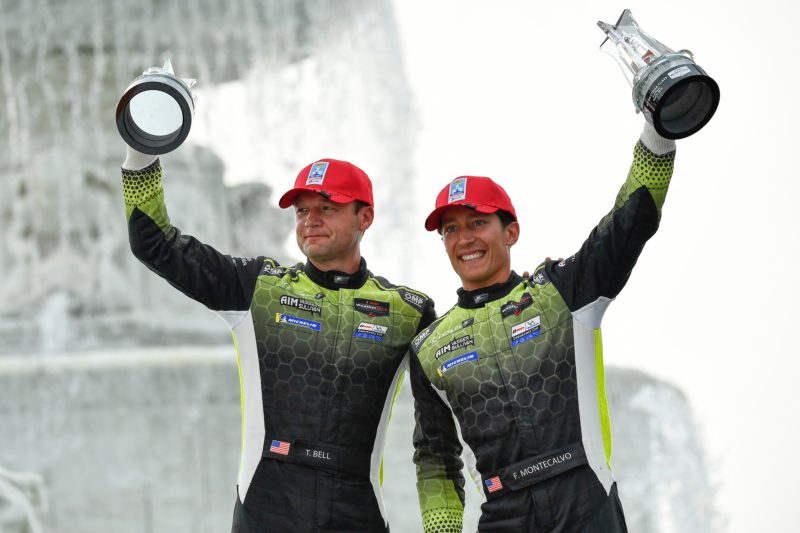 Montecalvo and Bell piloted their No. 12 Lexus RCF GT3 to their second podium finish of the 2019 IMSA WeatherTech season. Montecalvo qualified the car fifth in class but noted the AIM Vasser Sullivan team’s flawless pit stop and Bell’s excellent stint as key components to scoring their podium finish.

“I’m very happy to come away from the Detroit Grand Prix with another podium finish for Townsend and I,” stated Montealvo.

“We struggled initially during the first practice session, but Townsend and I kept making changes and asked for tweaks here and there to the set up, and every change just kept getting better and better. From the first practice on, we continued to improve, and we were able to get the car dialed in a little bit more with each session.”

“It really showed in qualifying that the changes we were making paid off. We were able to close the gap to our sister car and to the rest of the pack and qualified fifth in class, with our sister car qualifying just ahead of us in fourth.”

“The race was pretty hectic from the start with several crashes from both the GTD and P2 classes. I’m happy we were able to stay out of trouble and drive a clean race from start to finish.”

“The team did a phenomenal job in the pits to execute a super quick stop. In Detroit, you have to have a flawless pit stop because the fuel load is so short, and we only took two tires. With the condensed time to take on fuel and the two tires, the crew had to be on top of their game, and Townsend and I had to have an extremely efficient driver change as well.”

“When Townsend took over, I believe he came out of the pits in fourth but was able to take over the third position and drove a clean race till the checkered flag. Our sister car took their second victory of the season, so it was a great weekend for the AIM Vasser Sullivan team as a whole.”

The next race for Montecalvo will be the Sahlen’s Six Hours of the Glen on June 28-30. Be sure to follow Frankie on Facebook and Twitter to stay up to date with current broadcast times as well as all of Frankie’s racing news.