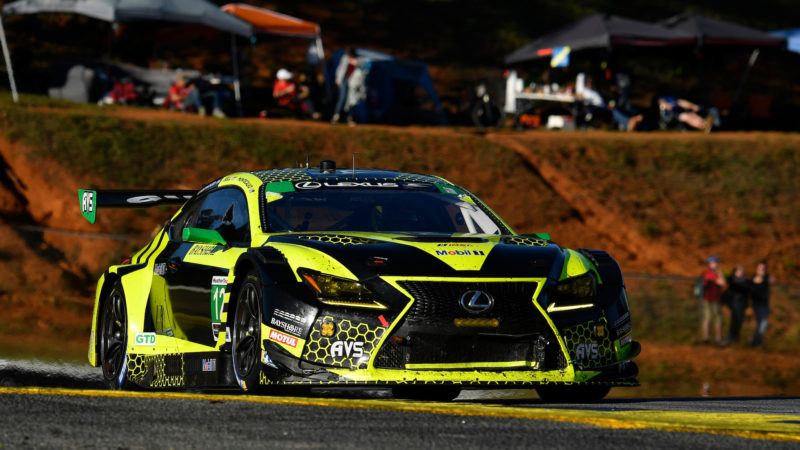 Montecalvo qualified the car P3 in class for the start of the 10-hour endurance race. When the green flag flew, Montecalvo quickly made his way into P2 and stayed there for the remainder of his opening stint and a half. Both Kirkwood and Bell drove excellent stints, keeping the No. 12 Lexus in the top five, and at times leading the GT Daytona field.

“The entire weekend at Petit Le Mans was a success, minus the last five minutes of the race which ended up with us in the wall. Before that, we had a good qualifying session. I went faster than my time for the 6-Hour race back in September, so I was able to get us into P3 for the start of the race,” said Montecalvo.

“The start was really smooth. I moved up to second place in the first corner, and then tucked in behind the Ferrari, which was very fast all weekend. I stayed behind the Ferrari and got into a good rhythm for my first stint and a half.”

“The driver changes and all of the pit stops were flawless throughout the entire race. Townsend, Kyle and the entire AIM Vasser Sullivan team did a phenomenal job. We were either leading or in the top five for the majority of the race, so we definitely had the potential for a podium finish.”

“In the last twenty minutes, we fell from third to fourth, but then a yellow came out with a few laps remaining, so we were optimistic that we could get back into the top three with a good restart. Unfortunately at the restart, one of the GTLM Porsches tried to make a pass on Townsend that caused contact and sent him into the wall. Thankfully, Townsend was able to walk away from the incident, but our race was finished.”

“We ended the race P8, so we were still able to score some points for the team, but we would have loved to have had a shot at the podium. I cannot thank the entire AIM Vasser Sullivan and Lexus Racing teams enough for another great weekend, and for always giving 110% all weekend long. The guys have some work to do before Laguna to get the car repaired, but we will be back stronger than ever and ready to take on Laguna Seca.”

The next race for Montecalvo and Bell will be the Monterey Sports Car Championship at Laguna Seca. On track action begins Saturday, October 31 with the race starting at 4:05 PM ET on Sunday, November 1. Be sure to follow Frankie on Facebook and Twitter to keep up with current broadcast times and all of Frankie’s racing news.