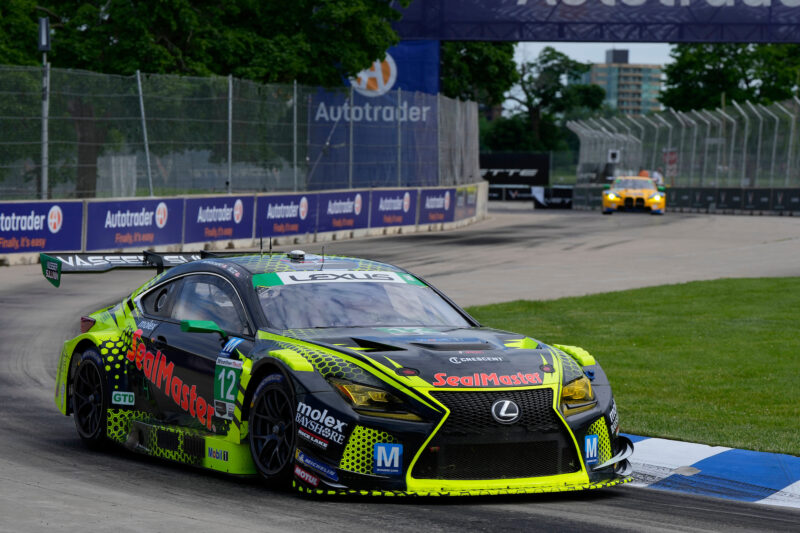 Montecalvo qualified the No. 12 Lexus RC F GT3 fourth in class for the 100-minute sprint race. After a hectic race start, Montecalvo was able to fall into a rhythm and run consistent laps before turning the car over to Telitz to bring their Lexus home in fourth position.

“It was great to be back at Detroit for the final street race of the year and for the last time at the Belle Isle circuit. I love street racing because it’s exciting to race so close to the walls. There’s absolutely zero room for error, so it’s imperative for the drivers to not make any mistakes during the weekend,” said Montecalvo.

“We rolled off the truck with awesome speed. We were P2 in the first practice and P4 in the second, so we knew we had a car with podium potential. I qualified our No. 12 Lexus fourth in class. The start of the race was a little chaotic as the cars ahead of us checked up into turn one, so I had to go a bit offline so that I didn’t run into our sister car.”

“Once everything shook out in the first lap, I was able to settle in and click off laps in P4. In the past, the Detroit Grand Prix has always seen at least one yellow flag period, so we were trying to conserve fuel as you can never predict when a yellow flag will happen. However, for the first time ever, the race never had a caution period during the entire 100 minutes.”

“When we realized that an early caution was not going to happen, we made the call to pit, and I handed the car over to Aaron still in fourth position. Aaron did a phenomenal job to click off fast laps and stay as close to the leading three cars as possible, but in the end, it was P4 for us.”

“I can’t thank the entire Vasser Sullivan and Lexus Racing teams enough for a great job all weekend and for working so hard to get our car prepped and ready for the bumpy streets of Detroit. Our sister car was able to come away with the win, so I’m very happy for Kyle Kirkwood and Ben Barnicoat for securing their first win of the season.”

“I’m looking forward to a few weeks back at home with my family and then getting back to the track later in the month at Watkins Glen for the Sahlen’s 6 Hours of the Glen.”

The next race for Montecalvo will be the Sahlen’s 6 Hours of the Glen on Sunday, June 26. To stay up to date with current broadcast times and all of Frankie’s racing news, be sure to follow him on Facebook and Twitter.