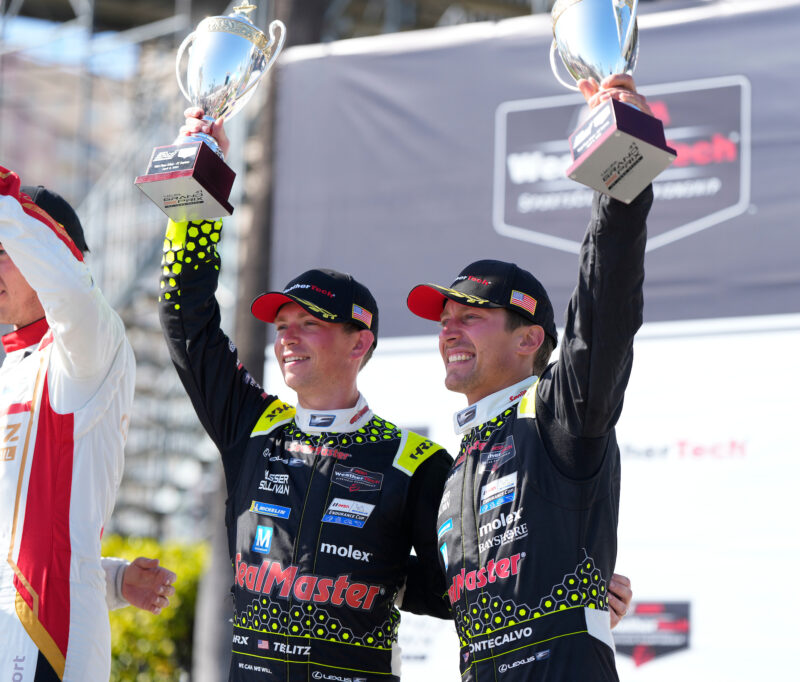 Montecalvo qualified the No. 12 Lexus RC F GT3 eighth in class on Friday ahead of the 100-minute street race. The race saw multiple full course yellow periods with several cars finding the limit in the concrete barriers, but Montecalvo and Telitz were able to evade trouble and drive to a third-place finish.

“It was great to be back at Long Beach for the Grand Prix. Friday was interesting as it was not the typical Long Beach weather we know and love. It was still sunny and beautiful, but much hotter than we’ve ever seen there,” explained Montecalvo.

“Even with the excessive heat, our Lexus RC F GT3s performed flawlessly, and I was able to qualify P8 in class. The start of the race was hectic, as always. I was able to pick up a couple of spots in the opening laps and then fall into a rhythm and click off laps.”

“I handed the car over to Aaron in P6, and then he went to work. There were several cautions that came out once Aaron took over. He was able to capitalize on the restarts and drove a phenomenal stint. He worked his way up into third which is where we would ultimately finish.”

“I’ve never scored a podium at Long Beach, so it’s fantastic to finally achieve that. Long Beach is a tough race to perform well at because you must get everything right. The start, the pitstop, restarts, and every lap has to be flawless, and the Vasser Sullivan team was able to achieve that last weekend.”

“I’m so proud of the Vasser Sullivan and Lexus Racing team for all their hard work to get us ready for Long Beach. I cannot thank the team and my co-driver enough for such a great weekend. The No. 14 guys also finished second in the GTD Pro class, so a double podium weekend at Long Beach will give us great momentum moving forward to Laguna Seca in a few weeks.”

The next race for Montecalvo will be the Monterey Sportscar Championship at Laguna Seca on Sunday, May 1st.To stay up to date with current broadcast time and all of Frankie’s racing news, follow him on Facebook and Twitter.