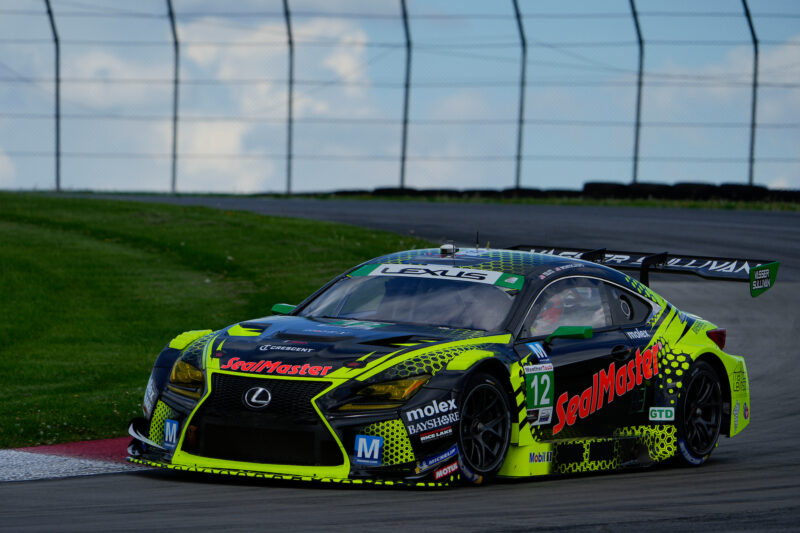 Wednesday, May 18, 2022 – Highlands, NJ – After a hard-fought battle at the Lexus Grand Prix of Mid-Ohio, Vasser Sullivan drivers Frankie Montecalvo and Aaron Telitz finished third in the GT Daytona class on Sunday.

Montecalvo qualified the No. 12 Lexus RC F GT3 sixth in class. After a chaotic start, Montecalvo was able to keep his Lexus out of trouble and fall into a rhythm, turning consistent laps. After only thirty minutes of fresh tires and fuel, the team decided to go off from the normal race strategy and called Montecalvo into the pits.

Montecalvo ran for another hour before the Vasser Sullivan crew called him in for a perfectly timed pit stop, just ahead of a full course yellow. He handed the car over to Telitz, who rejoined the pack in fourth position before the race went back to green. Telitz crossed the finish line P4 in class, but the No. 12 was promoted to P3 after the post-race inspections when the first-place finishing car was disqualified for failing the technical inspection.

“It was great to be back at Mid-Ohio for the Lexus Grand Prix. On Saturday, I qualified the car in mixed conditions, and we started the race sixth in class,” said Montecalvo.

“The start was absolute mayhem, as the GT classes were not split from the prototypes. For the first couple of laps I was racing LMP3 cars, so it was a bit chaotic, but finally settled down after a few laps. We went off strategy and came into the pits about thirty minutes into the race. I ran one more full stint, and came back into the pits about an hour later to hand the car over to Aaron. The team timed the stop perfectly, as a full course yellow came out just after we made our stop.”

“Aaron came back out of the pits in fourth position. After the restart, he was able to keep the car clean and run consistent laps. At that point, our strategy, as well as the other top five cars was to save fuel and make it to the end. Aaron did a phenomenal job clicking off fast laps, defending from behind, and saving fuel.”

“When the checkered flag flew, we crossed the line fourth in class. After the post-race technical inspections, the winning car was disqualified for multiple infractions promoting us to P3. We would have loved to have been able to celebrate on the podium, but hopefully we can do it again in a few weeks at Detroit.”

“I can’t thank Aaron, Lexus, and the entire Vasser Sullivan crew enough for working so hard this weekend to bring home a P3 finish at the Lexus Grand Prix. The team has scored a podium at every race since Long Beach. I’m looking forward to getting back to the final street race of the year in Detroit in June, and I hope we can keep the podium streak for the Vasser Sullivan team going there as well!”

The next race for Montecalvo is the Detroit Grand Prix on Saturday, June 4th. To stay up to date with current broadcast times and all of Frankie’s racing news, be sure to follow him on Facebook and Twitter.