P2 Finish for Montecalvo at WeatherTech 240 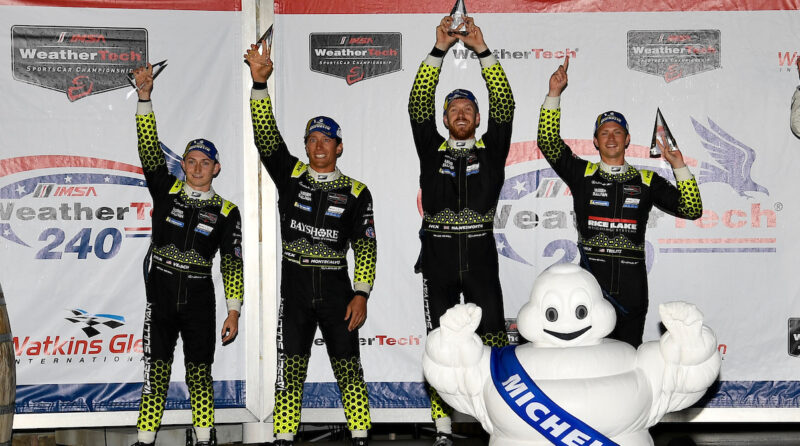 Montecalvo qualified the No. 12 Lexus RC F GT3 P2 in class for the two hours and forty-minute sprint race. At the start, Montecalvo quickly made his way into P1, where he stayed for the remainder of his stint. As soon as Montecalvo turned the car over to Veach, a red flag halted the race. Lightning in the area forced the race to come to a stop, so the cars and drivers returned to the pits and waited for the storm to move away from the track.

“It was a much different weekend from the six-hour event the previous weekend. We knew we had a strong car at the six-hour, so we rolled off the truck in a good position on Thursday. The rain always makes things interesting, but I really enjoy driving in the mixed conditions, and our Lexus excels in the rain as well,” said Montecalvo.

“I qualified second, and I had I really good start. By the end of the first corner I was able to move up into first and stayed there for the rest of my stint. Our car was really good. The Vasser Sullivan guys did a great job setting it up, and I was able to pull ahead and create a nice gap to the second-place car.”

“When I handed the car over to Zach, a yellow flag came out, which was quickly followed by a red flag for lightning in the area. When we were able to get back to racing, there was about fifty minutes left in the race. Zach did a phenomenal job with mixed conditions. Our teammate, Jack Hawksworth, slipped by into first shortly after the restart, and we ran in first and second all the way to the checkered.”

“It was a great finish for the team and for Lexus. We’re always striving for a Lexus 1-2 finish, and I’m happy to see our teammates back on the podium. I can’t thank the Vasser Sullivan team enough for all of the hard work over the last two weeks, and now I’m looking forward to spending the Fourth of July at home with my family and friends.”

The next race for Montecalvo will be the Northeast Grand Prix at Lime Rock Park on July 17. Be sure to follow Frankie on Facebook and Twitter to keep up with current broadcast times and all of Frankie’s racing news.