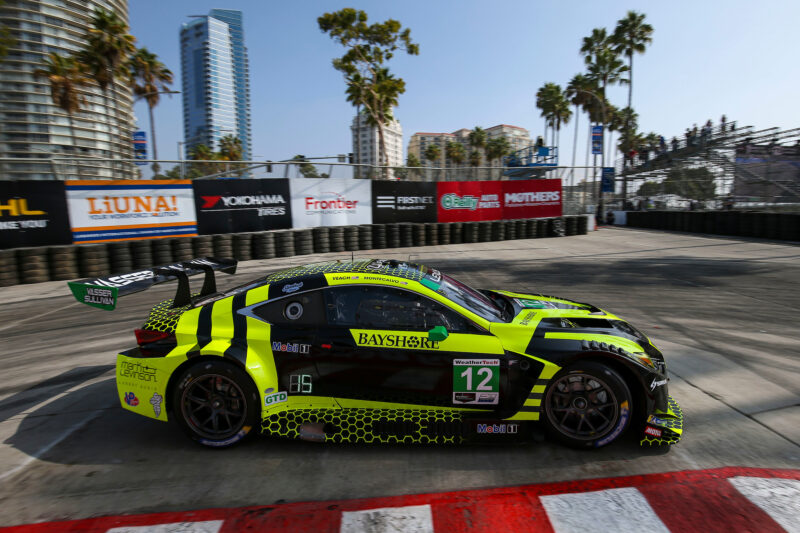 Montecalvo qualified the No. 12 Lexus RC F GT3 ninth in class for the start of Saturday’s 100-minutes sprint race. On the pace laps before the start of the race, Montecalvo ran over debris on track that caused a slow puncture in one of his tires.

Frankie was forced to make an unscheduled pit stop only two laps into the race, cycling him to the back of the pack. Montecalvo and co-driver Zach Veach needed a yellow flag later in the race to improve their chances of making their way back into the top ten. Except for a short yellow in the first fifteen minutes of the grand prix, the race remained under green flag conditions until the checkered flag came out.

“It’s always great to be back at Long Beach. We had our sights set on a podium finish, but unfortunately, that didn’t happen for us this weekend,” said Montecalvo.

“On the pace lap, I picked up some debris on the track, and one of my tires punctured. As soon as we went green, I knew I was going to have to pit for a tire change. I went to the back of the pack and from there I tried to work my way back through the field before handing the car over to Zach.”

“We decided to go off sequence in terms of our scheduled pit stop, in hopes that another yellow would come out later in the race, but we never saw another yellow. These 100-minute races are tough. The circuit is tough to pass on and there’s no room for error, but that’s all part of street racing.”

“We were able to work back up to P12 and collect a few more points for the team. While it’s not the result we had hoped for, we’ll move on and set our sights on VIR. I can’t thank Lexus and the Vasser Sullivan team enough for all of their hard work this weekend, and I’m looking forward to getting back to the track at VIR in two weeks.”

The next race for Montecalvo will be the Michelin GT Challenge at VIR on Saturday, October 9. Be sure to follow Frankie on Facebook and Twitter to keep up with current broadcast times and all of Frankie’s exciting racing news.