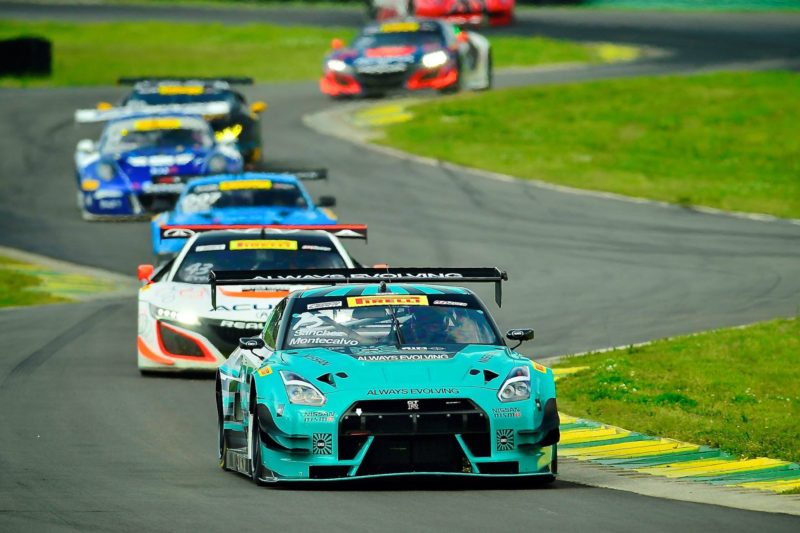 Montecalvo scored his first pole position of the 2017 season on Saturday before the first round the SprintX series. Unfortunately, Race 1 did not go as planned when the car suffered a mechanical issue that took them out of the running. However, the Always Evolving/Aim Autosport crew found the problem and was able to have the No. 75 machine back on track for Race 2 and charging through the field to a P4 finish in class.

“My first weekend with Always Evolving/Aim Autosport in the Nissan GT-R started off really well. We were able to get the pole position before the first race, so the car was really fast and a ton of fun to drive,” said Montecalvo.

“Soon after the start of the first race, I noticed there was an issue with the engine. It turned out to be an electrical connection that started to cut power to the engine. We just had to nurse the problem as long as we could, before I finally had to come into the pits for the guys to take a look at the car.”

“Unfortunately, since we had the issue we weren’t able to really put down any super fast laps to qualify us for Race 2. The crew did an incredible job finding the problem and fixing it so that we were ready for the race on Sunday.”

On Sunday, Sanchez started the race from P22 and managed to make his way to P14 before handing the car over to Montecalvo. From there Montecalvo would charge ahead to finish P4 in class for the second round of the SprintX series.

“Ricardo had an awesome start on Sunday. We definitely had our work cut out for us starting P22, but we made up a lot of positions after the start. My race stint was pretty short and uneventful. I passed a few cars but a late full course yellow came out, so I wasn’t able to fight for a spot on the podium. I think if we had gone back to green before the checkered flag we might have been able to come away with a third place, but unfortunately that didn’t happen for us.”

“I have to give the guys at Always Evolving/Aim Autosport a huge thank you again. I couldn’t be happier to have this deal come together. The team is amazing, and they worked so hard to give us a great car and fix the issue we had on Saturday. I’m really looking forward to getting back to the track with all of these guys in a few weeks time when we go to my favorite track in North America — Canadian Tire Motorsports Park.”

In case you missed the Grand Prix of VIR, you can catch the replay on Sunday, May 7 at 6:00 PM EST. Also, don’t forget to follow Frankie on Facebook, Twitter and Instagram to stay up to date with all of his racing news!