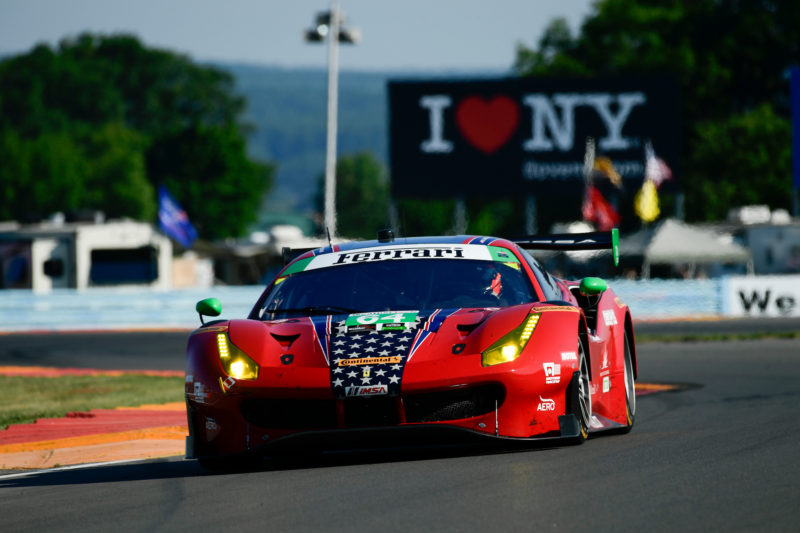 Thursday, July 5, 2018 – Highlands, NJ –After one of the hottest races on record, Scuderia Corsa driver Frankie Montecalvo, along with teammates Townsend Bell and Bill Sweedler, finished tenth in class at the Sahlen’s 6 Hours of the Glen last weekend.

With ambient temperatures in the high nineties and cockpit temperatures well over 110 degrees Fahrenheit, the drivers were faced with a daunting challenge of staying cool and hydrated while managing traffic and running a clean race.

“I think we had a really good run considering everything the track threw at us this year,” stated Montecalvo.

“Bill did a great job at the start, and even though it was extremely hot with temperatures close to 120 degrees in the cockpit, he was able to do a double stint, which was great for our strategy. My first stint was pretty uneventful. The series mandated new camber changes before the race, so I just tried to get acclimated with the car and stay out of trouble during my first stint.”

“Townsend did a great job during his first stint and was able gain a few positions in class. I got back in the car after Townsend’s stint and went about five laps and had a tire blow on the entry into turn two. It was a little scary given where I was on the track because it’s a very fast section, but luckily I was able to keep it under control and avoid any contact.”

“I was grateful to be able to keep the car out of the wall and on the track after the tire puncture, but because it happened in turn two, I had to drive all the way back around the track with the flat at a slow enough speed so that I wouldn’t damage the car.”

Montecalvo had worked his way up to P8 in class, but fell back two spots to P10 after the rear tire puncture. The Scuderia Corsa team was able to quickly fix the tire and get him back on track for the final hours of the race.

“Townsend did a great last stint and brought the car home for us in P10. For not being on track since March, the team and drivers performed flawlessly and I can’t thank Scuderia Corsa, Townsend and Bill enough for a great weekend. The car ran well all weekend, and I’m already looking forward to being back on track for our final race of the season at Petit Le Mans in October.”

The next race for Montecalvo will be the Motul Petit Le Mans. The 10-hour enduro will take place at Road Atlanta on October 13. Be sure to follow Frankie on Facebook and Twitter to stay up to date with all of his racing news.