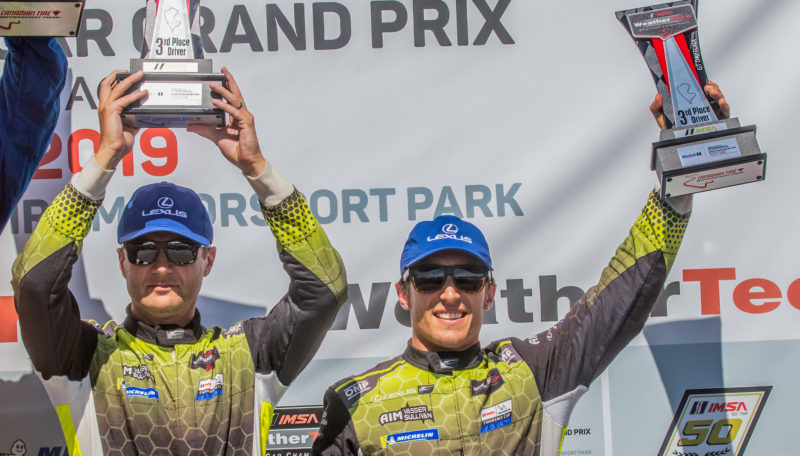 Tuesday, July 9, 2019 – Highlands, NJ –After scoring a top-ten finish at Watkins Glen International less than ten days ago, AIM Vasser Sullivan driver Frankie Montecalvo, along with teammate Townsend Bell, scored a P3 finish at Canadian Tire Motorsports Park on Sunday. The podium finish came only seven days after a P9 finish at the Sahlen’s 6 Hours of the Glen, the quickest event turnaround of the season.

Montecalvo qualified the No. 12 Lexus P6 for the start of Sunday’s race, but quickly made up two positions on the opening laps. Montecalvo held on to the fourth position for the remainder of his stint before handing the car over to Bell.

“We started picking up good momentum late in the weekend at Watkins Glen. We had an extremely strong race pace at the Glen but just had a little bad luck there. At Canadian Tire Motorsports Park, we kept the momentum rolling and had a strong weekend starting with the first practice session,” said Montecalvo.

“CTMP is a much different track from Watkins Glen, but with some adjustments to the setup, we were on the pace in no time. This is one of my favorite tracks, and I have a little more experience at CTMP than some of the other tracks on the schedule, so that helped me get up to speed quickly. The team gave us an incredible car right off the truck, so everything fell into place early on in the weekend.”

“We qualified P6 and had a clean race start. I was able to make up two positions, keep the car clean and hand it over to Townsend in P4. Townsend did an incredible job for the remainder of the race. He was able to take over P3 and stay there until the end. With the temperatures as hot as they were, it was definitely difficult in the end to manage the tires and to hold off Pat Long for the third position, but Townsend hung in there and did an amazing job to bring the car home and score our third podium finish of the year.”

“The whole AVS team did a phenomenal job, and I cannot thank them enough for another great weekend. We would have loved to finish a few steps higher on the podium, but with the current configuration of the BMW and Acura, P3 was the best we could come away with. It was a hard-fought P3, but we earned it, it was a team effort, and I’m looking forward to getting back on track at Lime Rock in two weeks and scoring another podium there.”

The next race for Frankie and Townsend is the Northeast Grand Prix at Lime Rock Park on July 19 and 20. Be sure to follow Frankie on Facebook and Twitter to stay up to date with current broadcast times as well as all of Frankie’s racing news.