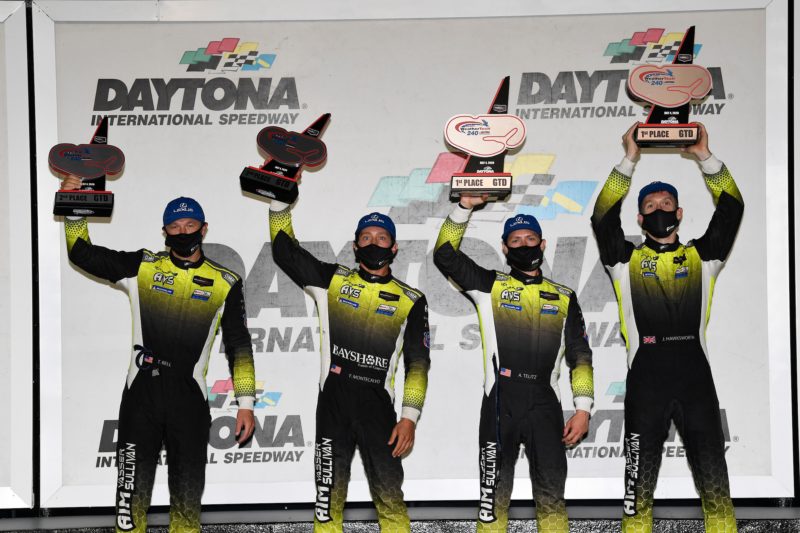 Tuesday, July 7, 2020 – Highlands, NJ – There were a few extra things to celebrate over the Fourth of July last weekend. In addition to celebrating our Nation’s Independence, AIM Vasser Sullivan driver Frankie Montecalvo alongside teammate Townsend Bell celebrated the return to racing in North America and a second-place finish at the WeatherTech 240 at Daytona.

Not only did Montecalvo and the AIM Vasser Sullivan team score a second-place finish, but the sister car won first in class, giving the team their first 1-2 finish.

“It was a different feeling getting back to the track last weekend. With the condensed schedule, it did not feel like a typical race weekend, but more like a test session. Nevertheless, it was great to get back to the track and start competing again,” said Montecalvo.

“I think the team did a phenomenal job all weekend. We were down some crew members because of the new protocols, so it was a thrash to get everything ready to go. It made it that much sweeter to come away from the weekend with a 1-2 finish after a long break and with all of the hurdles that everyone had to overcome.”

Montecalvo qualified the car P4 in class before Saturday’s two hours and forty minute sprint race. Although qualifying saw a dry track, the Florida skies opened an hour ahead of the race and thoroughly soaked the track, forcing the team to decide whether to start the race on rain tires or use their qualifying slick tires. With only a few minutes to decide, the team chose to use their dry tires, which proved to be an excellent decision.

“Going into the race, we saw a wet track that was drying out, and those conditions worked in our favor. The team did a great job making the call to start the race on our qualifying tires. I think most of the top of the field chose to run slicks, but some of the guys further back took gambles and changed to rain tires. I think it paid off for those who switched to rain tires in the beginning, but once the track started to dry more, it was definitely in our favor to be on slicks.”

“My start wasn’t ideal. I didn’t get the perfect jump on the green, so I lost a few positions on the first lap but was able to make those up in no time. I worked my way up to second and tucked in behind Aaron (Telitz) in the sister car, and we were able to check out on the entire field. When I gave the car to Townsend, we were 18-19 seconds up on P3. He did a great job to maintain that gap and never put a tire off track and was able to bring our Lexus RC F GT3 home behind the No. 14 for a 1-2 finish for AIM Vasser Sullivan and Lexus Racing.”

“We had to carefully manage fuel throughout the race to make it to the end  without an extra stop, especially since we never saw any cautions, but the team and the crew did a phenomenal job to give us a great car all weekend. The pit box calls were spot on, the pit stops were flawless, and all of the drivers never put a foot wrong all weekend, so I couldn’t be happier to be back to racing and come away from the weekend with a 1-2 finish at Daytona.”

The next IMSA Weathertech race will be the Cadillac Grand Prix of Sebring on Saturday, July 18. The race will air live on NBCSN and the NBC Sports App with TrackPass from 5:30 to 8:30 PM ET!  Be sure to stay tuned in to Frankie’s Facebookand Twitter to stay up to date with current broadcast times, networks, and all of Frankie’s racing news.