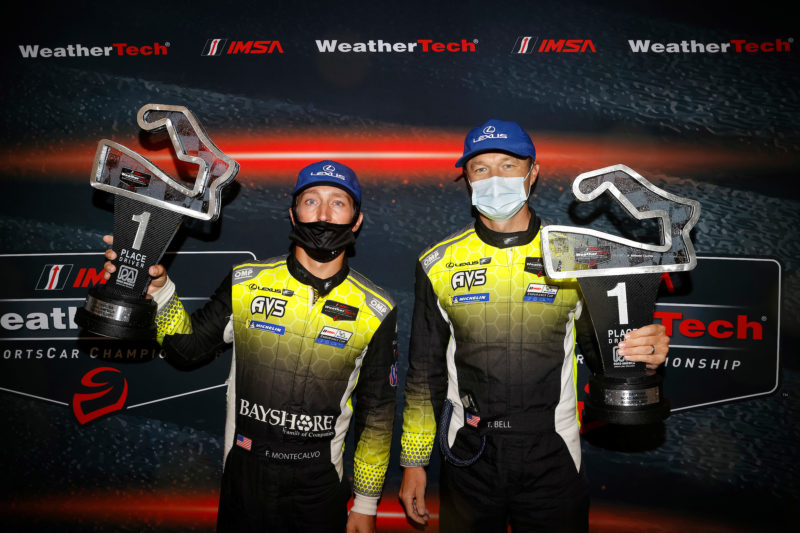 “It is so awesome to get our first win in the No. 12 car for AIM Vasser Sullivan. Townsend and I and the entire 12-car crew have been working so hard over the past two years to get that win, so to finally achieve it feels incredible,” said Montecalvo.

“I’m also so proud of the entire AIM Vasser Sullivan team for winning their third race in a row and finishing the weekend with another double podium. It was another great weekend all around for the team.”

Montecalvo qualified the No. 12 Lexus RC F GT3 second in the GTD class for the start of Sunday’s race, just behind the No. 14 sister car piloted by Aaron Telitz. Montecalvo and Telitz took the green flag and quickly began to distance themselves from the rest of the field.

“Aaron and I both had great starts. I was able to get around him into turn one, but I was trying to defend from the BMW behind, so Aaron got a really good launch out of that corner and passed me back by the time we were into turn three. The third place BMW was in the mix with us, but once we were around the first couple of corners, Aaron and I were able to pull away from the field.”

When Montecalvo turned the car over to Bell, the pair of Lexus’ were still running 1-2. Bell was able to overtake the No. 14 of Jack Hawksworth and began to increase the gap. Bell maintained a sizeable lead to the rest of the field, and then the rain came.

“Townsend did a great job to take the lead and run clean, consistent laps. As the rain was starting, we were ready to make our last scheduled pit stop, and Townsend said we should switch to rain tires. It was the perfect call because the rain started to pour shortly after, and we ended up going to full course yellow and eventually to a red flag because the conditions were so torrential.”

“When we went back to green, Townsend did a phenomenal job to keep the car on the racetrack and out in front. The Acura got around him in Canada Corner, but on the next lap, the Acura went off in the kink and Townsend was able to put the power down in our Lexus, get around him before the yellow flag came out, and then took the win.”

“I am so proud of the crew for all of the hard work they’ve put in over the last several weeks. It paid off, and I couldn’t be happier. I have to give a big thank you to everyone at AIM Vasser Sullivan and Lexus for giving us such a great car this weekend, and a huge thank you to Townsend as well for such a great drive. It’s awesome to finally have our first win, and now I’m ready for the next one.”

The next race will be The Michelin GT Challenge at VIR on Saturday, August 22. Be sure to follow Frankie on Facebook and Twitter to stay up to date with current broadcast times, networks, and all of Frankie’s racing news.