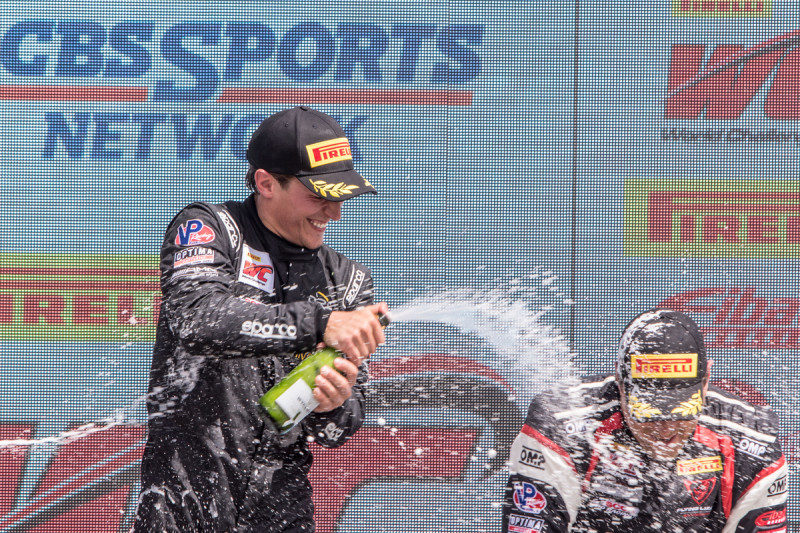 Wednesday, June 29, 2016 – Highlands, NJ –Road America proved to be a great track for Dime Racing driver Frankie Montecalvo in 2015, and after two podium finishes and a win there over the weekend, it proved once again to be a track where the Mercedes AMG SLS GT3 simply dominates.

“Going into the weekend we actually had a lot of ups and downs. We made a lot of changes to the car throughout the practice sessions, and honestly went into the qualifying session blind, having made another adjustment to the setup before the session started,” explained Montecalvo.

“We were having some issues with the back of the car during the practice sessions, but the Dime guys made a few more setup adjustments before qualifying, and they definitely proved to be good adjustments.”

Montecalvo went on to qualify on the pole for the Saturday afternoon race with a time of 2:06.566.

“The pole was really great for the team, but we were still having a few issues with the rear of the car, so we decided to make a few more adjustments before the race later that day. Unfortunately, the changes didn’t help, so the car was an absolute handful to drive that afternoon.”

Montecalvo finished in second place in the GTA Class for Round 12 of the Pirelli World Challenge Championship, but drove the fastest race lap in class, again qualifying him on the pole for Round 13 on Sunday morning.

“Going into Sunday, I was a little frustrated with the way the car was handling, but knew that it was a new race and that all the guys had been working hard to make improvements after Saturday’s race, and just had it in my mind that today was going to be a good day.”

“We took all the changes from the previous day out and went a completely different route, and it was such a huge improvement. It really showed in our pace and showed when we finished seventh overall. We didn’t really have a threat from behind with the GTA Class, so I was racing with the GT guys and trying to move up as much as I could.”

Montecalvo went on to win Round 13 in the GTA Class at Road America and finished 41 seconds ahead of his closest competition. With two podium finishes and a win, Montecalvo is starting to close the gap in the GTA Driver’s Championship to current leader Martin Fuentes.

“At this point, I’m not necessarily focusing on the Driver’s Championship. Of course, we want to do the best we can, but right now, our main focus is to get the car dialed in so that we can keep improving and hopefully make a home in the GT Class in the near future.”

“I’m really happy with the result from the weekend and proud of all of the work the guys put in to the car. I hope we can continue to make improvements and upgrades to get faster and more consistent and find ourselves battling in the top 10 with the GT guys a lot more for the rest of the season.”

Frankie’s next race will be July 29 and 30 at Mid Ohio Sports Car Course. Stay tuned for times and where to watch coming later in the month. And don’t forget, you can watch the re-air of Rounds 12 and 13 at Road America on CBS Sports Network on Sunday, July 3 at 3:00 PM EST!