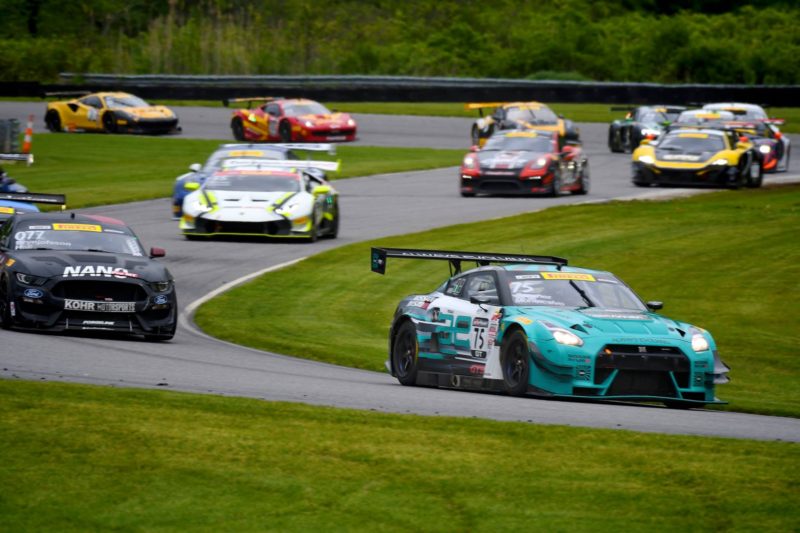 Tuesday, May 30, 2017 – Highlands, NJ – Always Evolving/AIM Autosport driver Frankie Montecalvo, along with teammate Ricardo Sanchez, scored not one, but two podium finishes at Rounds 5 and 6 of the SprintX Series at Lime Rock Park over the weekend.

The race weekend featured a very condensed schedule that only saw one practice before qualifying on Friday. Montecalvo was actually not able to participate in that practice because of a red flag that came out cutting the one and only practice short. However, that did not stop Montecalvo from turning several fast laps in qualifying and ultimately putting the No. 75 Nissan GT-R NISMO GT3 on pole in the GTA class for Race 1 of the weekend later that afternoon.

“I’m really happy to come away from the weekend with two podium finishes. Friday morning didn’t go as scheduled, because I wasn’t able to turn any laps before qualifying,” explained Montecalvo.

“It was also raining during our qualifying session, which was the first time I’ve driven the car in the wet. The car was great in the wet though, and I was able to qualify on pole in the GTA class.”

“The race was pretty uneventful for me. We had a good start, and I was able to remain P1 in class without any issues or contact when I handed the car over to Ricardo. Lime Rock isn’t the greatest track for the GT-R’s characteristics and we struggled a bit with our BOP (Balance of Performance) for the weekend. Ricardo did an incredible job during his stint and held the Porsche off as long as he could, but with the tire wear and BOP he fell back into second.”

Race 2 on Saturday afternoon started out with a big crash in turn one which Sanchez was able to avoid. However, debris from the other cars produced issues for the No. 75 machine forcing Sanchez to make an unscheduled pit stop early in the race.

“The start of Race 2 was a little crazy with a big wreck in turn one. Ricardo did a great job avoiding all of the other cars, but unfortunately a piece of debris became lodged in the grill of the car, so we had to make an unscheduled pit stop early in the race.”

“That pit stop put us at the back of the pack by the time we came back on track. Ricardo kept the car clean for the remainder of his stint, and then as soon as the pit window opened he handed the car off to me. I had a lot of ground to make up which isn’t easy at Lime Rock, but I was able to pass the Audi, the McLaren, and several other cars and finally caught up with the Bentley.”

“The Bentley, which was in third place, was battling with the second place Mercedes. They actually ended up having contact and I was able to capitalize on that and took over second position. In the end, we didn’t quite have the pace to keep the Porsche in our sights. I’m definitely pleased to come away from the weekend with two second place finishes, especially when we had all of the issues on Saturday. I’m looking forward to a little time off before heading back to the track later this summer.”

In case you missed either of the SprintX races, you can catch the broadcast on Sunday June 4 at 5:30 PM EST on CBS Sports Network.  Also, don’t forget to follow Frankie on Facebook, Twitter and Instagram to stay up to date with all of his racing news!