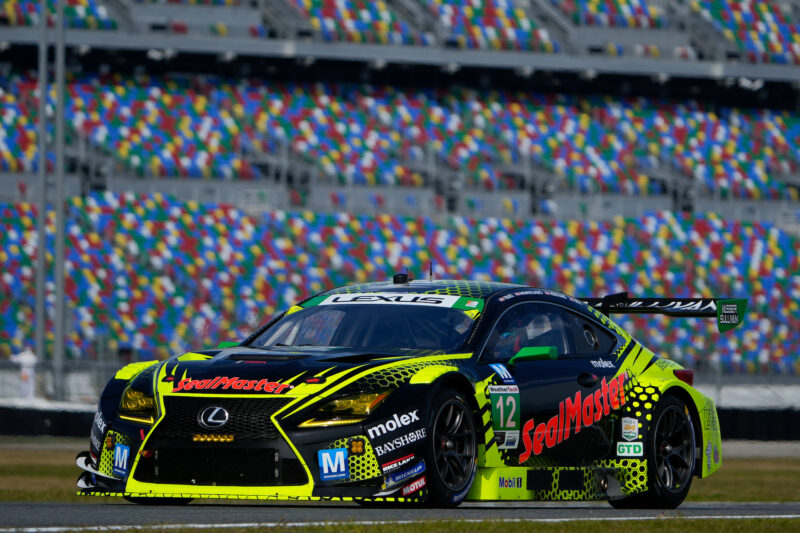 Wednesday, January 26, 2022 – Highlands, NJ – After a productive Roar Before the 24 test, Vasser Sullivan driver, Frankie Montecalvo, is ready to take on the 60th Running of the Rolex 24 at Daytona this weekend.

Montecalvo and co-drivers Aaron Telitz, Richard Heidstand, and Townsend Bell took part in the three-day test and qualifying race at Daytona last weekend. Montecalvo and Bell completed the qualifying race P4 in class, but moved up to P3 after post race technical inspections, securing a second row starting position for the No. 12 Lexus RC F GT3 for the Rolex 24.

“It’s great to be back at Daytona and to get three days of testing in ahead and the Rolex 24,” said Montecalvo.

“We learned a lot during the sessions, but I think we still have some room for improvements, which we can build off of in the practice sessions starting Thursday.”

A 61-car field is set to take the green flag for the Rolex 24 on Saturday, January 29 – one of the largest fields in the event’s 60-year history. The No. 12 Lexus will start P3 in the GTD class.

“The qualifying race went well for us. We started sixth, and I made up one position on the start. It’s extremely busy out there with 61 cars, so I’m happy that I had a clean race and was able to hand the car over to Townsend in a good position.”

“It was great to get a hot pit stop in ahead of the 24. Our pitstop and driver change went well, and then Townsend went to work. He was able to make up one more position to finish P4 in the GTD class. After post race inspections, one car received a penalty promoting us to P3 in class, so we’ll start on the inside of row two for the Rolex 24.”

“I’m pleased with our progress over the Roar and with our starting position for the Rolex 24. I’m looking forward to rolling into race week with a phenomenal team in Vasser Sullivan and Lexus Racing and an outstanding driver line-up.”

“We’ve finished on the podium at Daytona, but never on the top step. I think we’re in the best position that we’ve ever been in to be able to take the victory this year. We have an incredible group on the pit box, in the garage, and behind the wheel. We’ll be doing everything we can to ensure we cross the finish line first on Sunday afternoon.”

On track action for the Rolex 24 begins Thursday, January 27 and continues through the weekend. The green flag for the 60th Running of the Rolex 24 flies at 1:40 PM EST on Saturday, January 29. You can watch Frankie race live on NBC with coverage beginning at 1:30 PM EST. Coverage will switch to USA at 4:00 PM EST, but you can watch the race live in its entirety on the Peacock App. To stay up to date with current broadcast time and all of Frankie’s racing news, follow him on Facebook and Twitter.