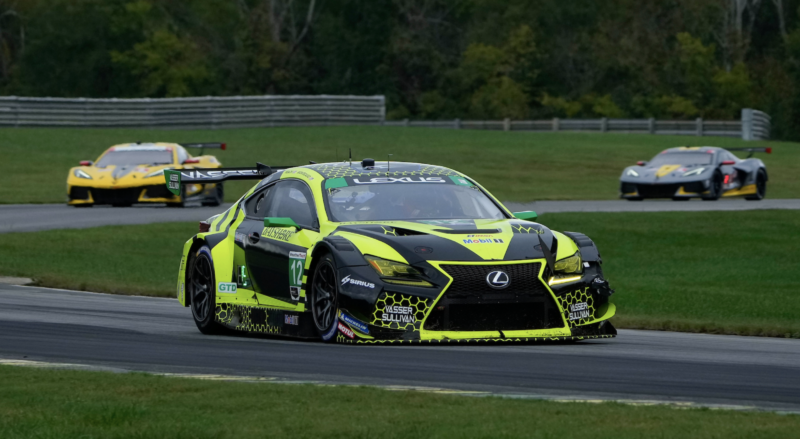 Tuesday, November 9, 2021 – Highlands, NJ – Vasser Sullivan driver Frankie Montecalvo is ready to take on the final round of the IMSA WeatherTech Season — Petit Le Mans. Montecalvo is hopeful to close the season out with a podium finish at the 10-hour endurance race held at Michelin Raceway Road Atlanta.

“I’m excited to get back to Petit and close out the season there. It’s one of my favorite races on the calendar. I love the track and the entire environment surrounding the event.”

“Our No. 12 Lexus RC F GT3 has been strong at Road Atlanta in the past. There are several high-speed sectors where the Lexus really thrives. The race is a lot later in the year than normal, so we should see lower temperatures and more nighttime running. Our Lexus typically likes cooler temperatures, so I think we should a strong car for race day.”

“I think we have a very strong line up for Petit Le Mans. Zach and I are looking forward to having Robert back with us for the final race. I know the entire Vasser Sullivan team has been working hard since VIR to get our car prepped and ready for the weekend, so I have no doubt we’ll roll off the truck strong.”

“We had some bad luck last year getting hit late in the race by a car in a different class, so we hope we’ll be able to stay out of trouble, run a clean race, and have better luck than last year. It’s the final race of the season, and we would love nothing more than to finish on the podium and close out the season strong.”

On track action for Petit Le Mans begins Thursday, November 11 at 9:20 AM EST and continues through Saturday. You can watch Frankie race live with coverage beginning at 12:00 PM EST on NBC Network. Coverage will continue on NBC Sports at 3:00 PM EST and continue through the checkered flag. Be sure to follow Frankie on Facebook and Twitter to keep up with current broadcast times and all of Frankie’s exciting racing news.