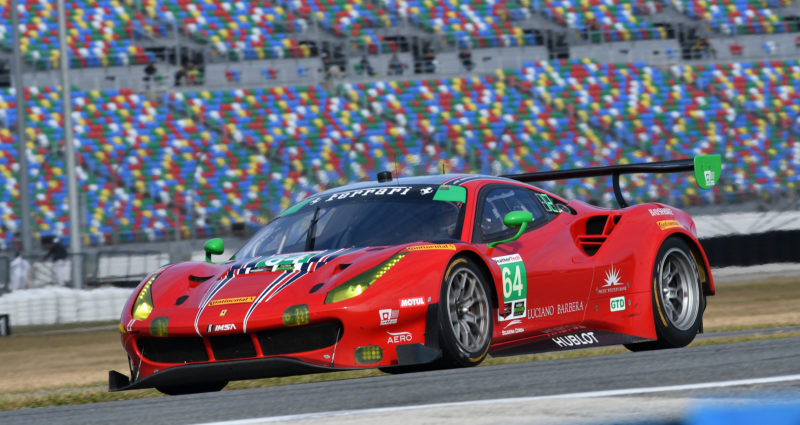 Thursday, June 28, 2018 – Highlands, NJ – Scuderia Corsa driver, Frankie Montecalvo, is eager to get back behind the wheel of the No. 64 Scuderia Corsa Ferrari 488 GT3 at Watkins Glen International for the Sahlen’s Six Hours of the Glen. This event marks the third round of the Tequila Patron North American Endurance Cup Championship in the WeatherTech Sports Car Series.

The last outing Montecalvo and teammates Bill Sweedler and Townsend Bell had in the No. 64 Ferrari was at the 12 Hours of Sebring in March. Their race ended early due to contact with an out of control prototype car, but the team has since built a brand new car and is ready to take on the six hour enduro at Watkins Glen.

“I’m very excited to be heading back to Watkins Glen this weekend for the Six Hours at the Glen. It’s been a long time since Sebring, so I’m beyond ready to get back in a race car,” stated Montecalvo.

“After our unfortunate end at Sebring, the team has been working very hard to build us a brand new car and Townsend was actually able to shake it down recently. Everything ran well, so now we’re anxious to get everything set up during out first practice on Friday.”

“It’s going to be very important for us to take advantage of every minute of each session so that we can get the car dialed in for the race, but the Scuderia Corsa guys have been working super hard, and I have no doubt that we’re going to have a successful weekend.”

Montecalvo’s best finish at the Sahlen’s Six Hours of the Glen came in 2014 when he and co-driver Gunnar Jeannette scored a third place finish in the Prototype Challenge Class with PR1/Mathiasen Motorsports. Montecalvo hopes another podium finish is in the cards for his team this weekend in the GT Daytona Class.

“I’m hopeful for a trip back to the podium on Sunday. I think we have the team, the line up and the car to do it. As long as we run a clean race, stay out of trouble on track and minimize our time in the pits, we should have a good shot at a top five or podium finish this weekend.”

On track action for the Sahlen’s Six Hours of the Glen begins Friday, June 28 and continues through Sunday, July 1. The green flag flies at 9:45 AM EST on Sunday. You can watch the race LIVE and in it’s entirety on Fox Sports 1 with coverage beginning at 9:30 AM.