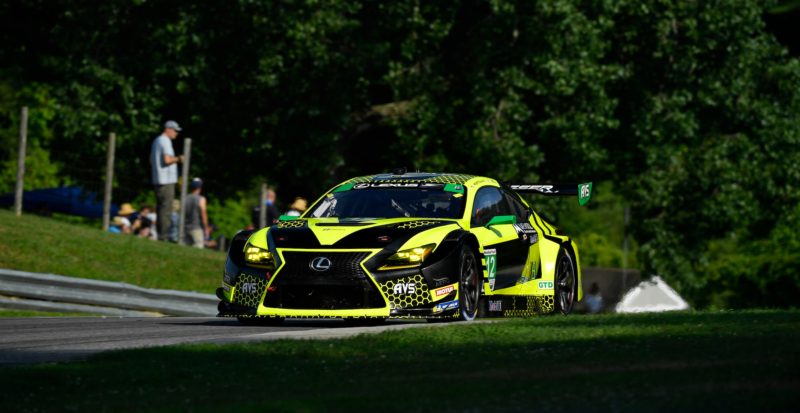 Tuesday, July 30, 2019 – Highlands, NJ – AIM Vasser Sullivan driver Frankie Montecalvo is ready to return to racing at Road America and continue his pursuit for the GTD Championship with co-driver Townsend Bell. Montecalvo and Bell are currently in fourth place in the GTD standings, but only 3 points separate the duo from second place.

“I absolutely love getting to race at Road America. It’s the longest circuit on our schedule, and it’s a fun, wide-open track with lots of fast corners,” explained Montecalvo.

“Road America is one of those tracks that gives you such a great feeling when you get it right. Every time you finish a session there, you can’t help but have a big smile on your face because it’s such an exciting track to drive.”

“I think our No. 12 Lexus RC F GT3 should excel there. The characteristics of the track will suit the Lexus well. Our car is able to generate a substantial amount of downforce, which will be very important for corners like the carousel and the kink. I know the guys at AIM Vasser Sullivan have been working hard to get our car prepped, and I feel confident that we’ll roll off the truck with a great race car on Friday.”

“I’m looking forward to getting back to Road America this weekend and continuing our push for the championship. In 2015, I scored back-to-back wins there in the Pirelli World Challenge Championship and another win in 2016. Our goal is to have strong and consistent finishes for the last four races of the season, and I would love to come away from the weekend with the first win of the season for Townsend and I, and another win at Road America.”

On track action at Road America begins Friday, August 2 and continues through Sunday. The green flag flies on Sunday, August 4 at 2:35 PM ET. You can watch Frankie and Townsend race live on the NBC Sports App with authentication or catch the delayed broadcast on NBC Sports at 6:00 PM ET.

Be sure to follow Frankie on Facebook and Twitter to stay up to date with current broadcast times as well as all of Frankie’s racing news.