Montecalvo Ready to Return to Racing at WeatherTech 240 at Daytona 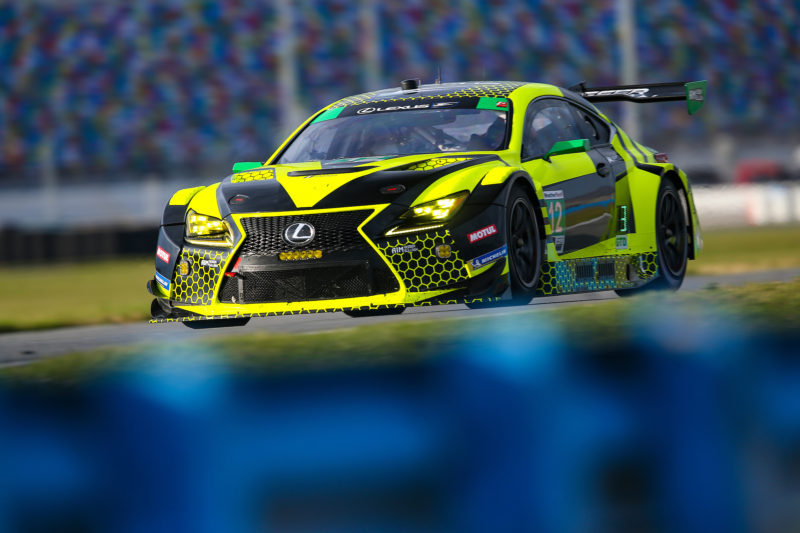 Tuesday, June 30, 2020 – Highlands, NJ – After more than five months of no racing activity, the time has finally come to head back to the track, and AIM Vasser Sullivan driver Frankie Montecalvo could not be more excited to get back behind the wheel of the No. 12 Lexus RC F GT3. The IMSA WeatherTech Sportscar Championship returns to action for the WeatherTech 240 at Daytona on Saturday, July 4.

Because of the COVID-19 pandemic, all racing and testing came to a halt only days before the Aim Vasser Sullivan team was set to race at the Mobil 1 12 Hours of Sebring in March. IMSA immediately went to work to determine when it would be safely possible to begin racing again, and that time is Independence Day weekend.

“I absolutely cannot wait to get back to the track and get back to racing this weekend at Daytona,” said Montecalvo.

“It feels like we’re coming back from another off-season because the time between races has been so long. It’s weird not to have raced for five months, and it also feels strange going back to Daytona since our last race was there, but I’m looking forward to turning laps there this Friday.”

Montecalvo has kept active during the past five months maintaining a busier than normal work schedule with his family’s business, Bayshore Recycling.

“When the pandemic started, we were deemed essential, so it’s been business as usual for us. It’s honestly been a bit busier than normal, but we’re extremely grateful to have been able to continue working and keep our employees working while making sure they stay safe and healthy over the last several months.”

Although Montecalvo is no stranger to racing at Daytona, racing in the July heat and in a sprint race format will be a new challenge.

“It’s going to be fun competing in a sprint race at Daytona. Every year for the Rolex 24, you’re basically just trying to survive to the end and hopefully make it across the finish line after 24 hours, but this is going to be an all-out sprint to the finish.”

“The super condensed format of the weekend will make it extremely important for everyone to be on top of their game right off the bat. Our set-up should be on point since our last race was the Rolex 24, so the major variable will just be how everyone deals with the higher temperatures. After being out of the car for several months, I think it’s going to take a few laps to get back in the groove of things, but I’m definitely up for the challenge.”

“I wish that all the fans could be back at the track with us, but I know that this is the safest way for us to get back to racing. I want to send a huge thank you to all of the front-line workers and first responders who work so hard every day, but especially over the last several months. It’s also my grandmother and father’s birthday this weekend so I know they will be cheering me on. We will be doing our best to put on a good show for everyone watching at home, and hoping that we can celebrate a victory in addition to celebrating our Independence Day this Saturday!”

On track action for the WeatherTech 240 at Daytona begins Friday, July 3. You can watch Frankie, and the AIM Vasser Sullivan team race live on Saturday, July 4 at 6:00 PM EST on NBCSN or the NBC Sports App with Track Pass.  Be sure to stay tuned in to Frankie’s Facebook and Twitter to stay up to date with current broadcast times, networks, and all of Frankie’s racing news.