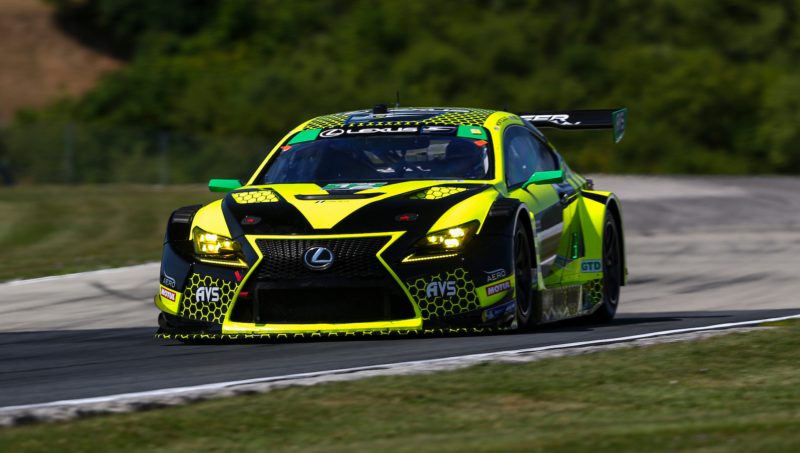 Wednesday, August 21, 2019 – AIM Vasser Sullivan driver Frankie Montecalvo, alongside co-driver Townsend Bell, is ready to take on the final GT only race of the season at Virginia International Raceway.

With only three races remaining in the 2019 WeatherTech season, the battles for the driver and manufacturer championships are heating up. Montecalvo and Bell currently sit in fifth place in the driver’s championship but are determined to finish on the podium at VIR and work their way to the top spot.

The Lexus RC F GT3 won in its class at the 2018 race at Virginia International Raceway, and Montecalvo and Bell are hopeful of scoring their first win of the season there in their No. 12 Lexus this weekend.

“I’m looking forward to getting back to VIR. The racing at VIR is always extremely close, so it’s fun for us behind the wheel and also a great show for the fans. It’s been two years since the last time I raced there, so I’m excited to go back this weekend with the AVS guys,” said Montecalvo.

“We tested at VIR a few weeks ago, and I think we should perform very well there. This track suits the characteristics of our car very well. The Lexus won at VIR in 2018, so we’re hoping to be able to repeat that this weekend with the AVS team.”

“The weather could definitely make things interesting this weekend. I’m hoping it won’t be too hot, as the high temperatures could really take a toll on the tires and the drivers as we saw at Lime Rock. But it’s the middle of summer in Virginia, so we’re expecting hot temperatures and always know that a pop-up storm is not out of the question there too.”

“With just three races left in the season, it’s go time now. Every race is important, and we need to finish strong from here on out. I know the AIM Vasser Sullivan team and engineers are doing everything they can to give us a car to win, and Townsend and I will be doing everything we can behind the wheel to maximize our points and hopefully bring home a win at VIR.”

On track action at Virginia International Raceway begins Friday, August 23 and continues through Sunday with the green flag flying at 1:35 PM ET. You can watch Frankie and Townsend race live on NBC Sports with coverage beginning at 1:30 PM ET. Be sure to follow Frankie on Facebookand Twitterto stay up to date with current broadcast times as well as all of Frankie’s racing news.