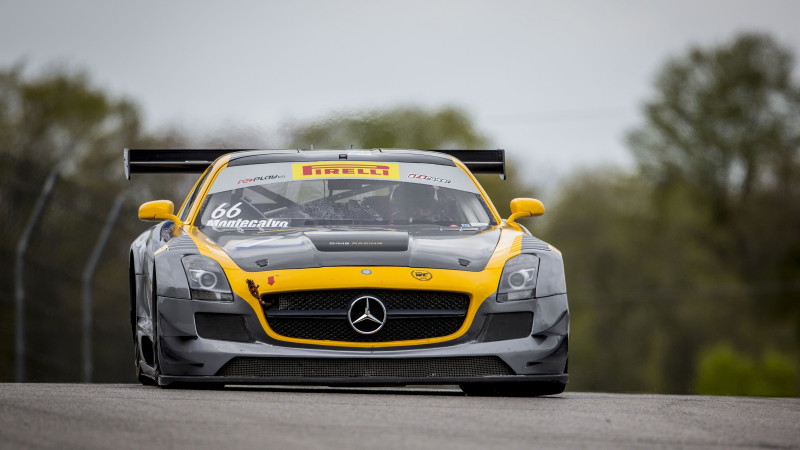 Wednesday, May 25, 2016 – Highlands, NJ – It was a busy weekend for Dime Racing driver Frankie Montecalvo who was in a race against the clock in more ways than one. Montecalvo started the Canadian Tire Motorsport Park weekend testing the Dime Racing Mercedes AMG GT3 at the Bowmanville track on Thursday. He also completed the Friday morning practice, but then raced his way back to his home state of New Jersey to make his sister’s rehearsal dinner and wedding the following day.

The timing of Round 8 in the Pirelli World Challenge Championship coincided with his sister’s wedding, and unfortunately Montecalvo was unable to make it to Saturday’s race. However, when Sunday morning rolled around, Montecalvo was on the first flight out of Newark International Airport to Toronto, where a Dime Racing team member was waiting to pick him up and get him to the track in time to compete in the second race.

Since Montecalvo was unable to race in Saturday’s competition and qualify for Sunday’s race, he had to start from the back of the field, but that didn’t stop Montecalvo from charging his way past the competition and onto a podium finish.

“The weekend started out really well. The car was good for the most part during the practice sessions, and I was happy with our times and the way the car felt going into the race,” explained Montecalvo.

“All of the travel worked out perfectly, so I was able to make it back to the track on Sunday with plenty of time to spare to get ready for the race.  The weather was pretty mixed though. It was raining one minute, then drying the next. Then it would rain on parts of the track and not others, so just adapting to the varying conditions was a big part of the challenge on Sunday.”

When the race was finally green flagged, Montecalvo wasted no time making up several positions and found himself second in class for nearly half of the race.

“We had a great race start. I made up several positions pretty quickly and got into P2 in class fairly early on. I got stuck behind the Acura, which was extremely fast on the straights, but a bit slower in the corners. About the same time, the tires also started to wear off, so it made it a lot more difficult to pass. Some of the corners were also wet from the rain, making it near impossible to make a clean pass.”

“With about eleven minutes to go, I thought I had a good pass around the Acura, but we ended up having a bit of contact which opened up a line for (Martin) Fuentes and one of the McLaren’s to get by. At that point I didn’t have enough time to try to work back to get around Fuentes, but I’m happy with a podium finish. We saw a lot of mixed conditions during the race, so I’m pleased to come away with a podium and championship points.”

Rounds 10 and 11 of the Pirelli World Challenge Championship will be held this weekend at Lime Rock Park in Lakeville, CT. The GTA class did not race there in 2015, so this will be the first time Montecalvo has raced at the 1.5-mile road course since 2011 when he raced there in the CORE Autosport PC car.

“I’m excited to go back to Lime Rock Park. It’s another track, like Canadian Tire Motorsport Park, that is extremely difficult to pass on, so that will make qualifying up front very important. It’s such an awesome track for fans, and it’s great because it’s only a few hours from home, so I’m excited to have family and friends come out for the event and support the Dime Racing team.”

Because the track is so short and the cars can reach speeds that enable them to go airborne on certain stretches of the circuit, the Pirelli World Challenge officials have elected to run the version of the track that includes a chicane before a fast, uphill, right-hand turn to slow the cars and will likely prevent them from becoming airborne.

“I prefer to run the track without the chicane. I’ve driven it both with and without the chicane, and from a driver’s perspective, it’s just more fun to drive it without, but I understand why they are including it for this weekend’s competition. Either way, I’m ready to get back on track and am hopeful to carry the momentum from last weekend’s podium finish to Lime Rock and have a few more podium finishes this weekend.”