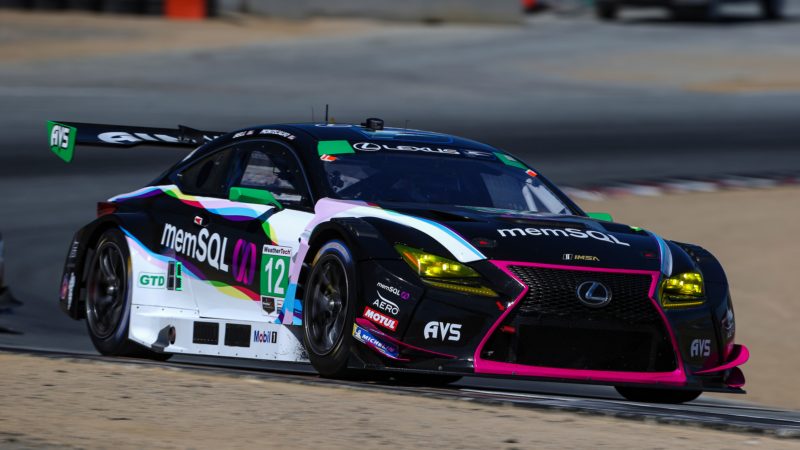 Thursday, October 10, 2019 – Highlands, NJ – AIM Vasser Sullivan driver Frankie Montecalvo is ready to take on the final race of the IMSA WeatherTech Championship season, the Motul Petit Le Mans. Montecalvo and full season co-driver Townsend Bell will once again be joined by Aaron Telitz for the final round of the Michelin Endurance Cup Championship.

Montecalvo completed a successful test with AIM Vasser Sullivan at the newly rebranded Michelin Raceway Road Atlanta last month and feel confident that their No. 12 Lexus RCF GT3 will be ready to top the charts for the ten-hour endurance race, which takes place on Saturday, October 12.

“I absolutely love Petit Le Mans. It’s a beautiful track with an amazing fan base, and the track is so much fun to drive. I love all of the elevation changes, the high speed corners, and racing into the night,” explained Montecalvo.

“I think the Lexus RCF GT3 should do very well at Michelin Raceway compared to our last outing at Laguna Seca. The high-speed corners of Road Atlanta and the downforce the Lexus generates should help us a lot this weekend. I’m looking forward to getting back on track and having a competitive car at one of the best events on the calendar.”

Montecalvo and Bell sit sixth in the points standings with a top three finish still within reach.

“It’s been an incredible season being a part of the AIM Vasser Sullivan team. We started out the season really well with a second place finish at Daytona and scored several more podium finishes throughout the year. Depending on where the competition falls on Saturday, we’re hopeful for a third place finish in the GTD drivers’ standings.”

“The Lexus performed well at Petit last year, so with that being said, hopefully we should be able to go out like we started with a great podium finish on Saturday. We’re definitely going to be pushing for a win in the No. 12 car because we haven’t gotten one yet and would love to close out the season with a win for the AIM Vasser Sullivan team.”

On track action at Michelin Raceway Road Atlanta begins Thursday, October 10 and continues through Saturday with the green flag flying at 12:05 PM ET. You can watch Frankie, Townsend, and Aaron race live on NBC Network with coverage beginning at 12:00 PM ET. Be sure to follow Frankie on Facebookand Twitterto stay up to date with current broadcast times as well as all of Frankie’s racing news.