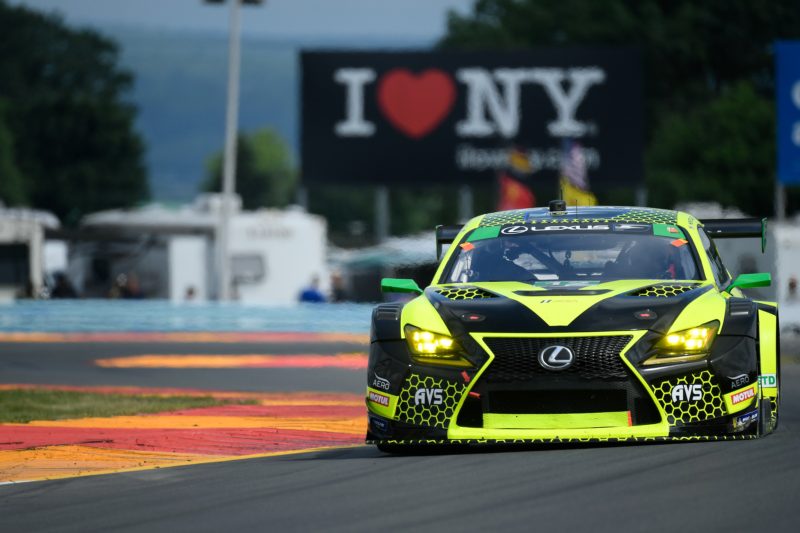 Wednesday, July 3, 2019 – Highlands, NJ –With the six hours of Watkins Glen just barely in the rear view, AIM Vasser Sullivan driver Frankie Montecalvo is ready to take on the next round of the IMSA WeatherTech series at Canadian Tire Motorsports Park [CTMP] this weekend.

The sixth round of the WeatherTech series travels north of the border to Bowmanville, Ontario. It is the quickest turnaround of the season with practice sessions starting only five days after the previous race at Watkins Glen where Montecalvo, along with teammates Townsend Bell and Aaron Telitz, finished P9 in class after six hours of racing.

“Watkins Glen was a tough one. It was a very intense race, but we had a good start even though we started from pit lane because we changed our engine before the race,” explained Montecalvo.

“We started at the back of the pack and worked our way up to a legitimate second place, and with the pit cycles, we even led a portion of the race. We had some ups and downs with a pair of penalties that would ultimately push us down the leader board, but the team did a phenomenal job to give us an amazing car. We had great pace throughout the race. Townsend and Aaron did an awesome job behind the wheel.”

“I would have loved to have finished a little higher on the leader board, but I’m very happy to come away from Watkins with points towards the championship. With CTMP right around the corner, I’m also glad our car had great pace throughout the race, and we’re leaving Watkins with no damage so we can roll right into Canada and be ready to go.”

“Canadian Tire Motorsports Park is hands-down my favorite track that we visit on the IMSA calendar. I took my first IMSA podium there. I love the flow of the track, and it’s super high speed, so it’s going to be a lot of fun wheeling our Lexus RC F GT3 around that place.”

“Although it’s a tight turnaround from Watkins Glen, there are a lot of benefits from back to back race weekends. Thankfully we didn’t sustain any damage at the Glen so we can basically roll right off the truck and take the knowledge that we learned at the last race and put that right back into practice at CTMP.”

“Watkins is similar to CTMP in that it’s a very high speed track. I think we showed great pace there, so I feel confident that the AIM Vasser Sullivan team will have our No. 12 Lexus up to speed and ready to run at the front of the pack for the duration of the weekend.”

On track action begins Friday, July 5 and continues through Sunday. Green flag will fly Sunday at 1:05 PM ET for the two hours and forty minutes race. You can watch Frankie and Townsend race LIVE with flag to flag coverage on NBC Network starting at 1:00 PM ET. Be sure to follow Frankie on Facebook and Twitter to stay up to date with current broadcast times as well as all of Frankie’s racing news.