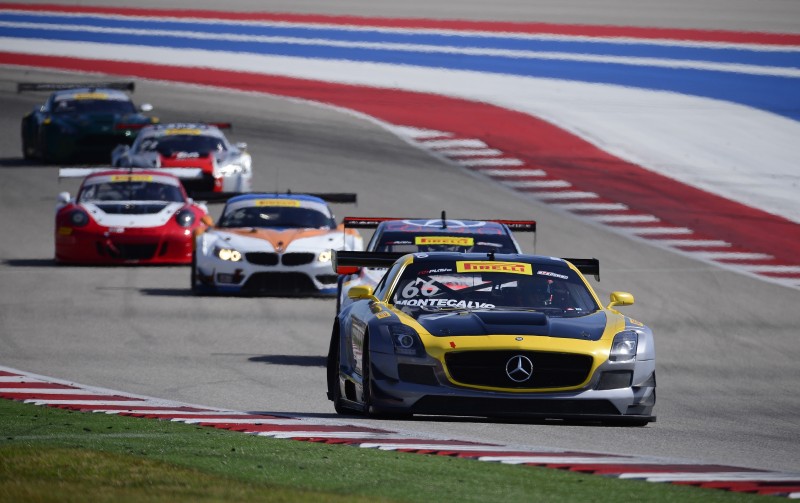 March 10, 2016 – Highlands, NJ – After an eventful weekend at the first event of the Pirelli World Challenge Championship, Frankie Montecalvo, with his new team Dime Racing, came away with a podium finish and lots of valuable points towards the 2016 championship. Races One and Two of the season were held at the Circuit of the Americas in Austin, TX.

“The weekend was definitely a bit exciting. We had a new engine and gearbox for the car, but a couple of the factory updated parts did not arrive before the start of the weekend, so there were a few small things that broke here and there which made the car a little tricky to drive,” explained Montecalvo.

“During the first race, we were hit in the right rear early in the race, which caused a lot of tow out, making the car very difficult to drive. So my main focus was to keep the car on track, and drive as clean as possible. The hit also damaged part of the exhaust system, which caused an exhaust leak in the car, and the throttle spring was broken, so every now and then the throttle would stick. And that was our Saturday.”

Although Montecalvo finished fifth in class, the Dime Racing crew worked throughout the evening and the following day to get the car ready for the second race on Sunday.

“Sunday wasn’t great, but it was a lot better than Saturday. We had a good car at the beginning of the race, but as the tires wore off a lot of the issues that were coming from some of the parts that weren’t great started to reappear. Since we missed the practice day, the setup was super quick, so I can’t thank the guys at Dime Racing enough for all of their effort and for actually getting the car on track.

“For everything that was going on, I’m really pleased with where we finished. It’s great to finish the weekend on the podium and start adding points towards the championship.”

“The Dime Racing guys are new to racing, but they are a great group of guys who love the sport and did an incredible job this weekend getting the car together and on track. My engineer Mark Schomann will be with us for the full season as well as my lead mechanic from last year, Josh Ferguson. We have a top notch group, and I’m looking forward to the rest of the 2016 season,” stated Montecalvo.

“Last year, we had a great weekend at St. Petersburg. We finished P2 in the first race and won the second race. I love St. Pete. It’s such a cool venue, but we will definitely be short on track time. We’re going to have to come out of the box a lot stronger than we did at COTA, but I have no doubt that once the Dime guys get their hands on the car, the Mercedes is going to be ready. It’s such a great car, and I can’t wait to get the new one when we go to Long Beach, but until then, I’m really looking forward to St. Pete, and hope to make another couple of trips to the podium.”