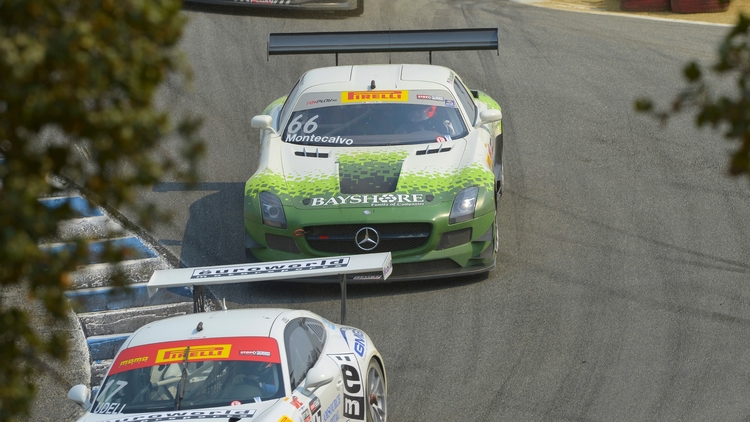 “I still can’t even believe it,” stated Montecalvo. “I had really high hopes coming into the season this year, but never imagined it would have been this good, and that we would be able to actually seal the championship an entire race before the final round. It’s been a great way to come into the series.”

“I can’t thank my DragonSpeed team and teammates enough for giving me such a consistent car weekend after weekend and for all of the support throughout the season,” continued Montecalvo. “And the same goes to my parents, family, friends and sponsors. I couldn’t have done it without the love and support from each and every one of them.”

Montecalvo, 24, of Highlands, NJ entered the final round of the Pirelli World Challenge Championship 195 points ahead of the second place GTA driver. At that point, the championship was sealed and Montecalvo was able to enjoy a less stressful weekend and experiment with the set up of his Mercedes AMG SLS GT3 at Mazda Raceway Laguna Seca.

“The weekend was a success all around. We tried a couple of different set up changes because the pressure to win was essentially off. We struggled a bit and might have experimented a bit too much, but we were still able to finish strong. I’m extremely happy for my teammate Eric Lux who finished first at Laguna. It was such a great way to end the season with a DragonSpeed 1-2 finish.”

“I just can’t stress enough how great it was being a part of the Pirelli World Challenge Championship this year. Being able to run with some of the older, more experienced guys in the GT Class was such a great learning experience, and I‘m truly honored to say that I was able to race with those guys.”

Although the 2015 season has come to a close, Montecalvo has already set his sights on racing plans for 2016.

“I’m happy to announce that I will be returning to the DragonSpeed team in 2016. However, we’re heading across the pond to race an LMP2 car in the European Le Mans Series. I’ll be teaming up with Henrik Hedmund and another driver to be determined. It’s been a couple of years since I’ve raced in the ELMS, so I’m excited to get another opportunity to race in that championship and especially in an LMP2 car.”

“I definitely want to keep a racing presence here in the United States. GT racing here in America is something I want to continue doing for as long as I can. I don’t have any plans in the works to race here in 2016 currently, but I’m hoping I’ll be able to race in a couple of US races next year, or maybe even a full season. Until then, I’m going to enjoy a little time back at home with my family and friends, but I’ll definitely be looking forward to getting back to the race track.”

In case you missed it, you can watch final round of the Pirelli World Challenge Championship from Mazda Raceway Laguna Seca on Sunday, September 20 at 3:30 PM EST on CBS Sports Network!