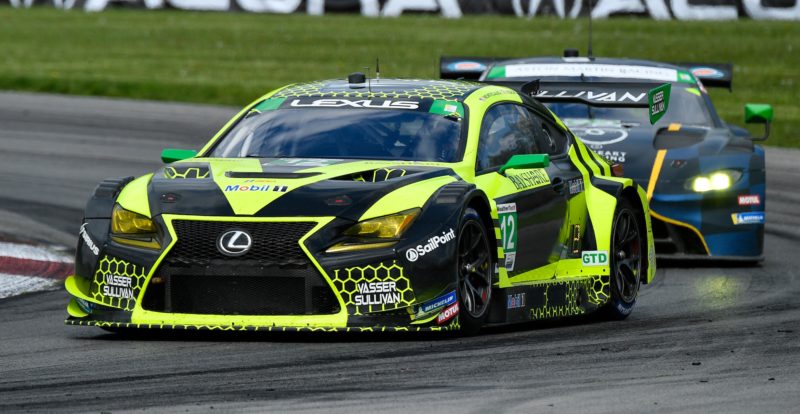 Thursday, June 10, 2021 – Highlands, NJ – Vasser Sullivan driver Frankie Montecalvo hopes to score his second podium of the season this weekend at the Detroit Grand Prix. The street course situated on Belle Isle, just east of the city, will be the first street circuit on the IMSA WeatherTech calendar in over two years.

“It’s always exciting going back to a street course, and Detroit is no exception. It’s extremely difficult to pass because the circuit is so tight, so qualifying and getting the best track position possible for the start of the race will be key,” explained Montecalvo.

“Last year both street races on the schedule were canceled due to Covid, so I’m looking forward to racing the Lexus RC F GT3 on a street course for the first time in over two years. We had a strong weekend in Detroit in 2019, finishing third in class, with our sister car scoring the win. We know the Lexus performs well at Detroit, and we’re hoping to have a strong finish again this weekend.”

Zach Veach was set to co-drive with Montecalvo, but a positive COVID-19 diagnosis will prevent him from competing in this weekend’s race. Townsend Bell will join Montecalvo for the 100-minute street race.

“It’s a shame that Zach will not be able to race this weekend, but we all wish him a speedy recovery and know he’ll be back stronger than ever at Watkins Glen. I’m glad Townsend is able to fill in for the weekend. He obviously knows the car and the track well, and it would be awesome to be able to have a similar finish to 2019, but maybe a couple steps higher on the podium.”

“I’m looking forward to kicking things off on Friday morning with the first practice and having a strong weekend. We had a great result at Mid-Ohio last month with a P2 finish, and we’re hoping to keep that momentum going this weekend. I think if we can qualify well, complete quick pit stops, and have a clean race, we have a very good chance of getting back on the podium on Saturday.”

On track action for the Detroit Grand Prix begins on Friday, June 11, and continues through the weekend. The green flag flies on Saturday, June 12 at 5:10 PM ET. You can watch live on NBC Sports with coverage starting at 5:00 PM ET. Be sure to follow Frankie on Facebook and Twitter to keep up with current broadcast time and all of Frankie’s racing news.