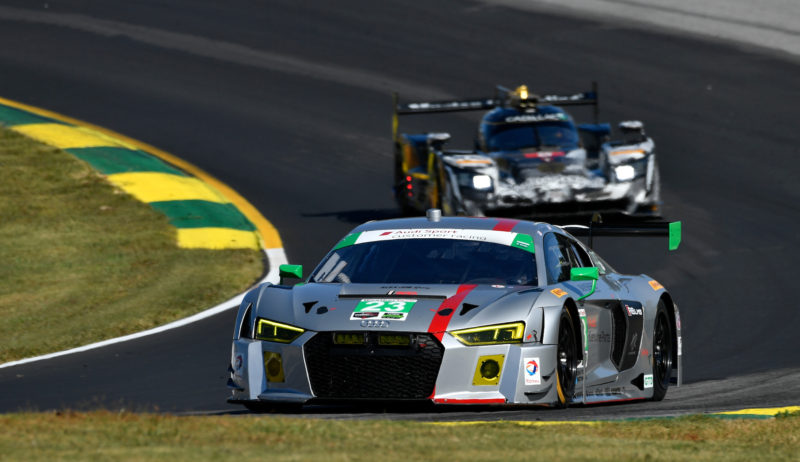 On Friday, Bell qualified the No. 23 Audi R8 LMS 13th in class for the start of Saturday’s race. Bell, Montecalvo and Sweedler pushed hard to make up places throughout the 10-hour enduro. In a race that saw over ten yellow flag periods, they protected the car well and kept their pit stops to a minimum, and in the end, came away sixth in class.

“There were a lot of interesting things that happened during the race. It was just a crazy race from start to finish,” explained Montecalvo.

“We had a some light contact throughout the day, but luckily nothing that was bad enough to take us out of the race or put us several laps down. We had a good clean race other than a couple of close calls.”

“Townsend and Bill and the entire team did a great job throughout the entire race and weekend. We didn’t have the fastest car on track, but we stayed out of trouble, and we were there at the end, which is a great feat after ten hours and as many cautions as we saw during the day.”

“It was definitely a fun race. My last stint was probably the most stressful because we had zero radio communication. I couldn’t hear the guys in the pits and they couldn’t hear me. Judging whether to take the pass around or to come in to the pits was a bit of a gamble, but luckily it all worked out.”

Montecalvo, Bell and Sweedler were able to race the No. 23 into fifth position in the final hours of the race. However, a late yellow helped their competition stretch their fuel economy, and they took the checkered flag sixth in class.

“The last caution didn’t help us because the CORE car was able to stay out and stretch their fuel under yellow. We were definitely in the running for a top five finish, but that last caution gave some of the other cars the ability to run till the end, where we would have been fine either way.”

“It was definitely a challenging year for us, but I’m very proud to have finished every race with Alex Job Racing. I can’t thank Townsend, Bill and the entire team enough for all of the hard work that everyone put in and for giving it their all every single race. I’m looking forward to a little down time in the off season and working on my 2018 racing plans.”