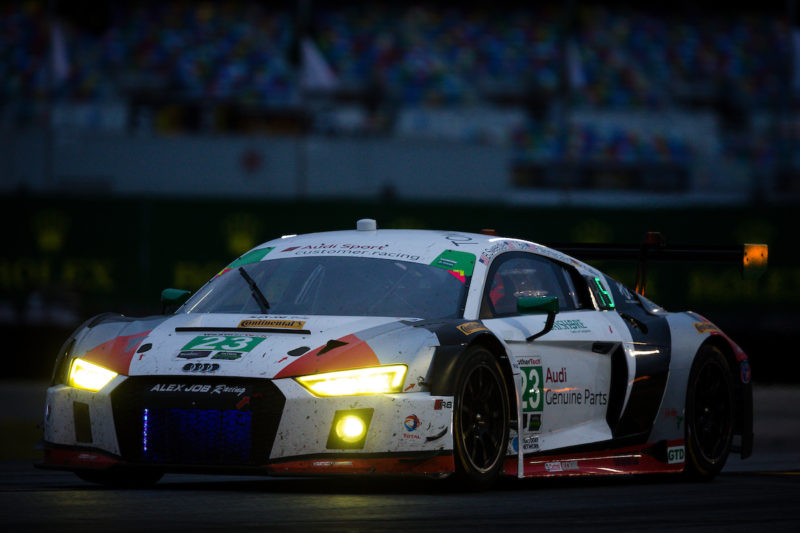 Wednesday, February 1, 2017 – Highlands, NJ –After a grueling 24 hours battling heavy rain, tremendous traffic and near freezing temperatures, Frankie Montecalvo finished P6 at the 2017 Rolex 24 in his debut race in the GTD class with Alex Job Racing.

Montecalvo and teammates Townsend Bell, Pierre Kaffer and Bill Sweedler began the twice around the clock endurance race P16 in class. They would shuffle positions among the other 26 GTD entries over the next 24 hours but would ultimately cross the finish line 6th in class.

“I feel like we had a pretty solid start to the season. We were up against 26 other cars in one of the strongest GTD fields to ever compete at the Rolex 24. To be able to finish in sixth in a field that competitive is pretty amazing, and I think we have a lot to be proud of,” explained Montecalvo.

“Hats off to the Alex Job Racing team. They are a top-notch, professional team and everyone worked so hard for the entire 24 hours. I couldn’t be happier to be a part of the AJR team and with their performance both on and off the track.”

“It takes perfection to be at the top of the podium at the end of a 24 hour race. Unfortunately we made some mistakes that cost us some time on track from the penalties we incurred. We had several minutes of penalties that set us back pretty far. However, the pace of the Audi at the end of the race was right on par with the leaders, so it shows that we definitely had the car to compete for the win, but again, to win a race like the Rolex 24 it takes absolute perfection.”

The 24 Hours of Daytona saw approximately 16 hours of wet weather conditions, which caused the early retirement of several GTD competitors. However, when the rain began to slow, Montecalvo took a gamble on slick tires and was able to pick off several competitors who remained on the Continental rain tires.

“I was in the car when the track started to dry. I made the call pretty early to switch to the slicks, which looking back was definitely the right call. At first I thought I had made a mistake because I was all over the place for the first two laps trying to get heat into the tires, and it was still really slippery. Luckily, I was able to keep the car on the track and pass a few class cars who made the decision to stay on rain tires, and I also made up a lap or two.”

“Pierre, Bill and Townsend took over for the last few stints to the checkered flag and got us all the way up to sixth position, which is incredible after all of the elements we faced the previous 24 hours. I’m so happy to come away from the Rolex 24 with a clean car and fifth place points towards the Tequila Patron Endurance Cup Championship. I can’t wait to get back behind the wheel of the Audi for the 12 Hours of Sebring, and after our performance at Daytona, I feel confident our car will be in the hunt for the class win at Sebring in March.”

The next IMSA WeatherTech race for Montecalvo and the Alex Job Racing team will be the 12 Hours of Sebring on March 18. Be sure to follow Frankie on Facebook and Twitter to stay up to date with all of his racing news and to find out when and where you can watch his next race live!