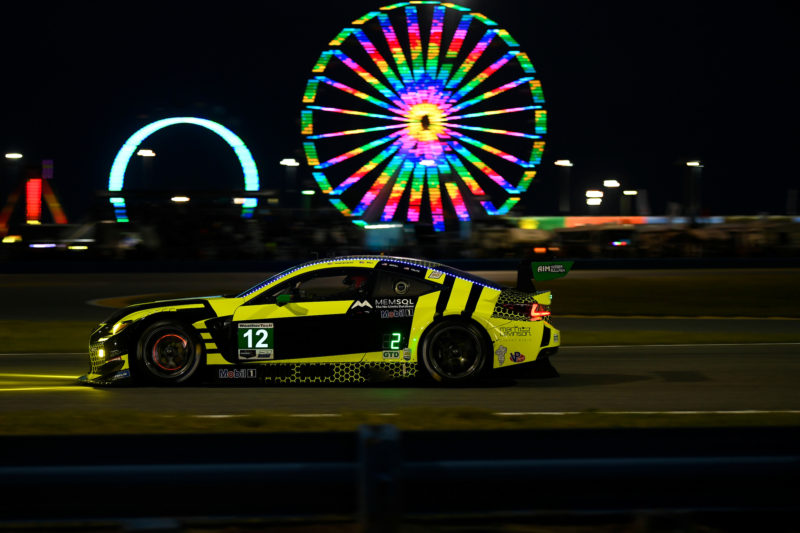 Montecalvo qualified the No. 12 Lexus RC F GT3 fourteenth in class for Saturday’s race. When the green flag flew on Saturday, Montecalvo did not waste any time making up positions during his first of several double stints. At the end of his stint, Montecalvo had made his way all the up to P2 in class.

“This was the fourth time I’ve had the opportunity to compete in the Rolex 24. It’s great to come home with a third place finish especially considering the treacherous conditions we had. They were definitely some of the worst conditions I have ever seen as a driver,” explained Montecalvo.

“We made some changes before qualifying that didn’t work as well as we were hoping, but the team was able to turn the car around for the race. When I started on Saturday, the car was awesome.  I was able to move all the way up to second before turning the car over to my teammates.”

“All of the drivers did a phenomenal job during their stints. We all were able to stay clean, never put a tire off track, and that’s really what you have to do to be able to make it to the end of a 24 hour race.”

“We had one pit stop that occurred just as the pits were closing, so we, unfortunately, went a lap down to the class leaders waiting for pit exit to open, but we kept pushing, and we were able to get that lap back, and eventually the race came to us.”

While the No. 12  Aim Vasser Sullivan entry made its way back through the field to challenge for a podium, the rain also made its way to the track around 4:30 AM. Although the conditions were manageable at first, as the rain got heavier, visibility decreased and the chances for off track excursions, aquaplaning and contact between competitors increased.  Race control waved the first of two red flags just after sunrise.

“I was in the car when the first red flag came out. When Race Control decided that the conditions were improving, I got back behind the wheel and we did two yellow flag laps before going back to green. We went green and I could not see a thing going into turn one because the spray was so bad. I had to rely heavily on the spotters to make my way around the track. However, we went almost immediately back to yellow as there was a massive incident on the front straight behind me.”

“That was the final stint for me. Townsend and Jeff would finish the race, but we eventually went back to red flag conditions after multiple incidents and because the rain just never let up.”

The 57th Rolex 24 finished under Red Flag conditions and the No. 12 Aim Vasser Sullivan entry finished P3 in class.

“I cannot thank my team and teammates enough for such a terrific finish in some of the worst racing conditions I’ve ever experienced. I would have loved to have seen where we might have finished if we were able to go back to green, but to come away from the Rolex 24 with a podium finish is definitely a great way to start the season, and I am beyond happy with that.”

“All of the drivers did a phenomenal job throughout their stints, and Jeff, in particular, was incredible in the rain. He was able to continue to race hard, get us into P3 and never seemed to have any issues keeping the car on track and out of trouble.”

“Hats off to Lexus for building a car that can stand up to the competition and not only survive, but thrive for 24 hours of racing at Daytona. I have to give a huge thank you to everyone at Aim Vasser Sullivan as well. They’ve only had this car for about two months, and to be able to get everything ready in time and come away from the Rolex 24 with a podium finish is just incredible.”

The next race for Montecalvo will be the Mobil 1 12 Hours of Sebring on March 16. Be sure to stay tuned to Facebook and Twitter to stay up to date with all of Frankie’s racing news!