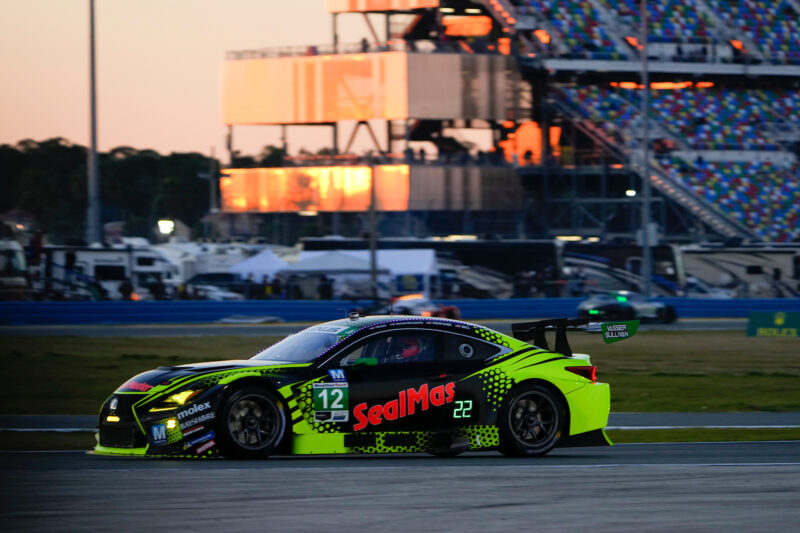 Montecalvo and Bell qualified the No. 12 Lexus RC F GT3 P3 in class for the twice around the clock endurance race. When Montecalvo took the green flag, he had a strong start and was able to maintain his third-place position.

“The Rolex 24 started out really well for us. We knew the start would be hectic with 22 cars in our class and another 12 in GTD Pro, but we had a good starting position in P3, so we were able to avoid a lot of the mayhem and stay out of trouble,” said Montecalvo.

“I was able to get into a good rhythm and click off laps, but only a few hours in, I was unfortunately collected by a spinning Ferrari just before getting back onto the banking at turn six.”

“There was a decent amount of damage to the car, but I was able to limp back to the pits and straight into the garage. Then the team really went to work. I’ve said it before, but I’ll say it again, we truly have the best crew in the business, and they worked so fast and did everything they could to get us back on track.”

“Once the crew made the necessary repairs, I was able to return to the race. At that point, we were in last position and quite a few laps down. We knew a shot at the podium was unlikely but gave it everything we had.”

“The car ran flawlessly for the remainder of the Rolex 24, and Aaron, Richard, and Townsend all had phenomenal stints. There were several yellow flag periods throughout the 24, so we were able to gain some laps back and eventually made our way up to P15 in class.”

“I cannot thank the entire Vasser Sullivan and Lexus Racing teams enough for all of their hard work to get us to the Rolex 24 and to cross the finish line on Sunday. While it wasn’t the result we had hoped for, I’m so proud of how hard this team worked throughout the Roar and Rolex 24 weekends. I’m already looking forward to getting back to the track at Sebring in March. We’ll be back even stronger and pushing for nothing less than a win.”

The next event for Montecalvo will be the Mobil 1 12 Hours of Sebring on March 19. To stay up to date with current broadcast time and all of Frankie’s racing news, follow him on Facebook and Twitter.