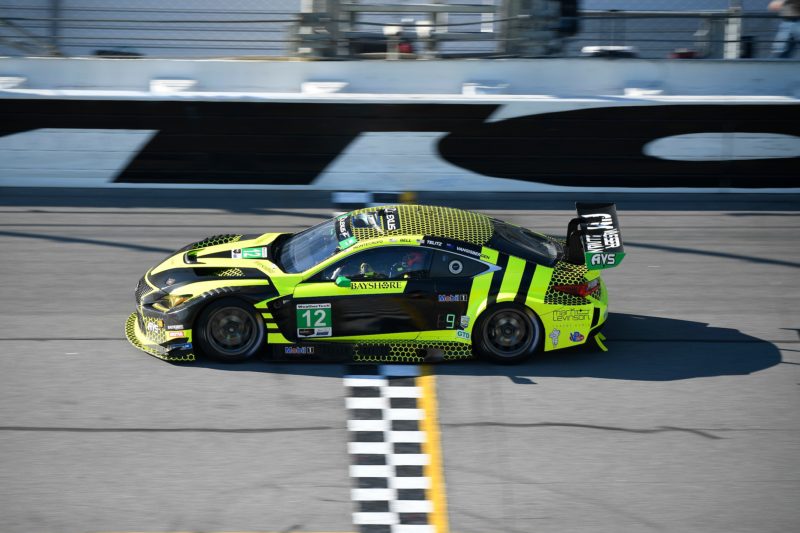 Tuesday, January 28, 2020 – Highlands, NJ – After 24 hours of arduous racing on the high banks of Daytona International Speedway, driver Frankie Montecalvo and the No. 12 AIM Vasser Sullivan entry finished P12 at the Rolex 24.

Montecalvo qualified the No. 12 Lexus RCF GT3 P7 in class earlier in the week. When the green flag flew, Montecalvo quickly made his way into fourth position, passing several cars before turn three. You can rewatch Frankie’s race start here.

Montecalvo and teammates Townsend Bell, Aaron Telitz, and Shane Van Gisbergen settled into a rhythm, putting in fast, consistent laps and eventually saw themselves in second position in class. An incident overnight forced the No. 12 to make a trip behind the wall for repairs, but the AIM Vasser Sullivan crew worked tirelessly to get the Lexus repaired and back on track.

At that point they were almost 30 laps behind the leader in class, but the No. 12 team was determined to bring the car home and finish strong.

“All in all, we had a good start to the season. Of course, we would have liked to have finished a little higher on the scoreboard, but I couldn’t be happier with the effort from the AVS team and my co-drivers,” said Montecalvo.

“I had a good start to the 24-hour race. It was fun to gain a bunch of positions after getting stacked up on the start. I was able to work my way up to fourth and race there for a while. Our car is a little stronger on cold tires than some of our competitors, but that’s a double edge sword. We were stronger on cold tires, but we had to manage our tires more as we got close to the end of a stint.”

“Our pace was extremely strong, especially in the cooler temperatures at night. We had a little bad luck overnight and had to take the car behind the wall for repairs, but the team did a phenomenal job to get the car repaired and back out on track. The car ran flawlessly once we were back on track, but unfortunately, we were about 30 laps down and we weren’t able to get those laps back before the checkered flag.”

“I cannot thank the AIM Vasser Sullivan team and Lexus enough for all of their hard work and all of my co-drivers. Everyone worked so hard all weekend, and I could not be more proud of our entire team. We would have loved to have been fighting for a win again, but we’ll take what we learned here and apply it for Sebring. We’ll be back stronger than ever and looking for a win in March at The 12 Hours of Sebring.”

The next race for Montecalvo is the Mobil 1 12 Hours of Sebring on March 21. Be sure to stay tuned in to Frankie’s Facebook and Twitter to stay up to date with current broadcast times, networks and all of Frankie’s racing news.