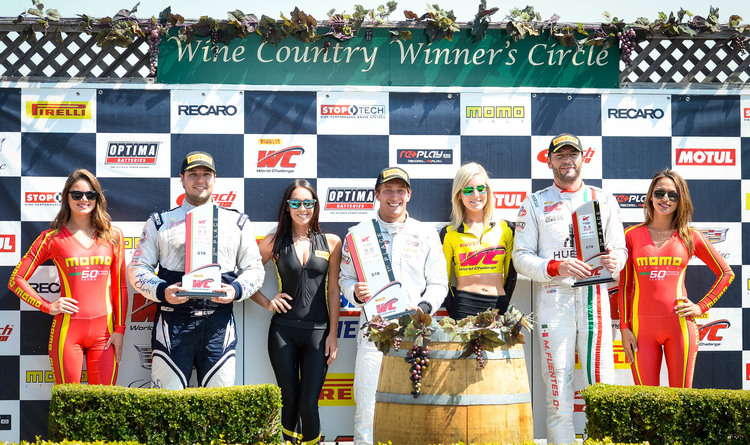 “The weekend went great! I couldn’t have asked for a better way to end the weekend other than two first place finishes, but clinching the championship is definitely a great feeling, and I couldn’t be happier with my first trip to Sonoma Raceway,” stated Montecalvo.

Montecalvo, 24, of Highlands, NJ entered the weekend leading the championship battle but knew he needed to execute a near perfect weekend to maintain his lead. After driving his way to a 2nd place finish, and then to his seventh 1st place finish in rounds 18 and 19 at Sonoma Raceway, Montecalvo was able to gain enough points to distance himself from the second place GTA driver, Henrique Cisneros, and seal the championship before the final round takes place at Laguna Seca in two weeks time.

“The first race was really tough. Henrik (Hedman) actually hit me in turn four and spun me out. I didn’t know it was him until after the race, but unfortunately with GT Cup traffic coming through, I had to wait for the entire field to pass before I could get back on track,” explained Montecalvo.

“Once I rejoined the field I just put my head down, drove a bit more aggressively than usual and managed to make my way up to second place. By the time I moved into second position, I had worn my tires down considerably and wasn’t able to really fight for first place with Nielson. We finished second, which was great for points, and we had a very fast car, so we were set to start P1 for Race #2 the following day.

“Day two was pretty uneventful. I had an okay start, but Beretta and Pilgrim got around me, so I just tucked in behind them. After the restart I just made sure to stay out of trouble, drive a smart race and we came home P1. It was a great way to end the weekend, and then learning that we had distanced ourselves enough from second place in the GTA points championship just made it that much better.”

“It’s a great feeling having now clinched the championship in GTA, but I’m also really happy for all of the DragonSpeed boys, because we also won the team championship this weekend. I don’t think it’s actually set in yet because I know we still have one more race at Laguna Seca, so I want to focus on getting another good result there and then enjoy the success we’ve all had this season.”