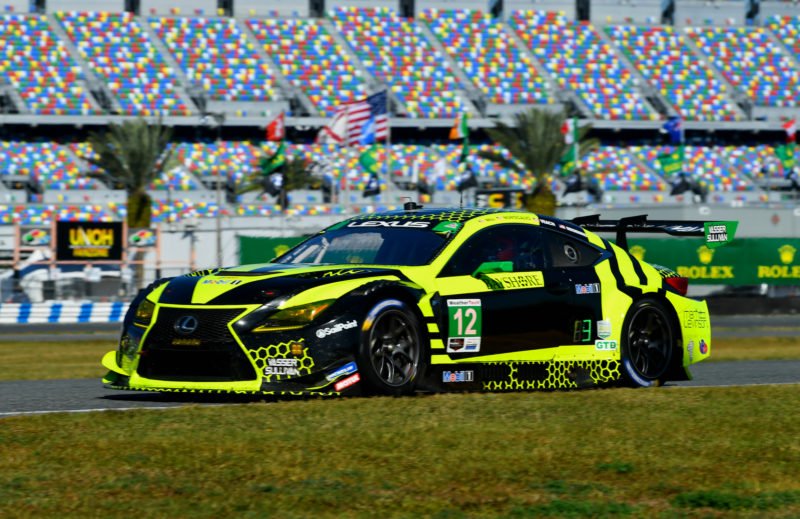 Megennis and Veach qualified the car P10 at the Motul 100 Pole race the previous Sunday. Montecalvo took the green flag in the No. 12 Lexus RC F GT3 on Saturday afternoon. He went from tenth to second place within the first lap and made the pass for the lead of the GT Daytona field on the second lap. Montecalvo continued his run and put a gap on the second place Turner Motorsport BMW of more than five seconds, but unfortunately, an issue with the transponder would cause Montecalvo to take a prolonged pit stop to make repairs.

“The start went really well for us. I saw everything unfolding in front of me with the GTLM cars that had contact and then the GTD cars trying to avoid the mayhem, and I was able to capitalize on the situation. Everyone was on the radio yelling, ‘Go left. Go right. Go left,’ and I ignored it because I was trying to react to the chaos in front of me,” explained Montecalvo.

“It worked out well for us because I came out in second place. Shortly after that, I thought I might have something for the bimmer in first place. I was able to use the draft and inch up little by little and swept by him turn one.”

“Our car was really strong at the start. The Lexus does incredibly well generating temperature in the tires right away. I was able to get into a rhythm and started pulling away. I got a little frustrated when I started to catch the slower LMP3 cars because I could see the field behind me start to catch up. I was able to use traffic to get around the P3 cars, and then extended our lead to about 5.5 seconds.”

“We ran as long as we could before needing fuel, and then when I came into the pits, we knew we had to fix the transponder, so that put us a few laps down. My second stint was full attack mode. We had a couple of yellows, which helped us a lot, and I was able to get us back on the lead lap before handing the car over to my co-drivers.”

Overnight, another driver sustained some damage, which caused the No. 12 crew to take the car back to the garage for repairs.

“We lost a fair amount of laps when we had to go behind the wall for repairs, but once I got back in the car, everything felt great, and we started clicking off laps again. On my fourth stint around 1:00 AM, we had an electrical problem that caused the car to overheat and caught on fire briefly. We had to go back to the garage for more repairs, but the team did a phenomenal job to get us back on track and running smoothly again.”

“At that point, we just tried to stay out of trouble and out of other teams’ races, but we were determined to finish and collect a few points towards the championship. We ultimately finished P13 in class. The Vasser Sullivan crew is the best in the business and never gave up. I can’t thank the team and everybody involved enough for giving their all the entire weekend. While it wasn’t the result we were hoping for, I’m proud of the team for working so hard and for crossing the finish line.”

The next race for Montecalvo will be the Mobil 1 12 Hours of Sebring on Saturday, March 20. Be sure to follow Frankie on Facebook and Twitter to keep up with current broadcast times and all of Frankie’s racing news.