Eyes Forward to WeatherTech 240 at Watkins Glen for Montecalvo 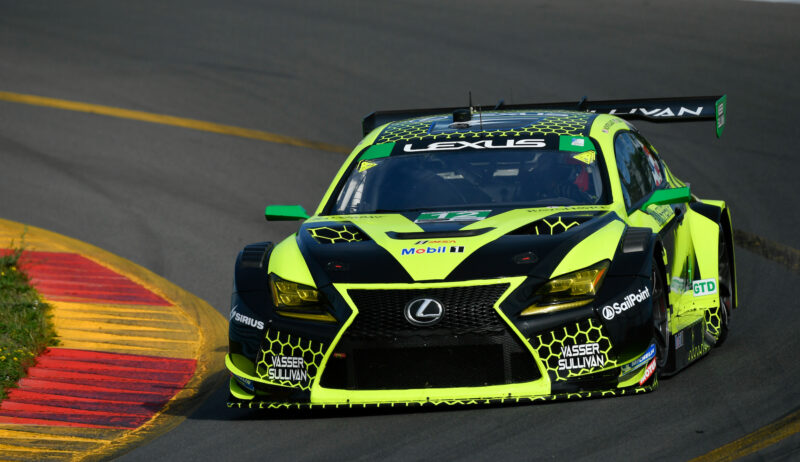 Wednesday, June 30, 2021 – Highlands, NJ – Vasser Sullivan driver Frankie Montecalvo has shifted focus from the Sahlen’s 6 Hour at Watkins Glen last weekend to the WeatherTech 240 that kicks off on Thursday, July 1.

Montecalvo, along with co-drivers Zach Veach and Robert Megennis, finished eleventh at the Sahlen’s 6 Hours of Watkins Glen on Sunday. While it wasn’t the result they had hoped for, the team gained a massive amount of information and data that they will put into practice this weekend at the WeatherTech 240.

“The Sahlen’s 6 Hour was a tough one for both Lexus cars. We had a great start. I moved up to third in my first stint and was able to settle in behind our teammate who was running P2,” explained Montecalvo.

“As the race continued, the track started to change, but we were able to make adjustments accordingly, and we adapted well. We had some bad luck with a caution period late in the race that did not work out for our pit window and the fuel strategy that we were on. Sometimes you need a little luck, but unfortunately, we didn’t have it last weekend when the caution came out.”

“To run a six-hour race with no mistakes and no offs, and to come away P11 really shows how competitive and close the GTD field is. The Vasser Sullivan team did a phenomenal job all weekend long. Even though we didn’t finish as well as we would have liked, we gained a ton of experience and data that we can put into the sprint race coming up this weekend.”

The WeatherTech 240 takes the place of the Canadian Tire Motorsports round that was meant to be this weekend but was cancelled due to the Canadian border closure because of Covid-19. The two hours and forty-minute race will once again be held at Watkins Glen, but it will be run Friday evening when the sun is setting, and the temperatures are forecasted to be much cooler than the previous weekend.

“I’m looking forward to the addition of the sprint race at Watkins on Friday. It’s a really quick turnaround for the team, so it’s great that we were able to finish the six-hour without any bumps or damage to the car.”

“It’s hard to predict what the weather will do on Friday, but it does look like we’ll have cooler temperatures for the race. The Lexus definitely likes cooler temps, so I think it will suit our No. 12 Lexus RC F GT3 well to race later in the day.”

“With the race on Friday being a sprint format, our strategy will be to qualify well and get out in front and stay there. With all of the data and experience we gained last weekend, and knowing that the car performs well here, I think we have real potential for a podium finish for both the No. 12 and the No. 14 Vasser Sullivan cars. We’re going to be pushing hard for that, and I’m hoping to cross the finish line with a 1-2 Lexus finish on Friday night.”

On track action for the WeatherTech 240 at Watkins Glen starts on Thursday, July 1. The green flag flies on Friday, July 2 at 6:10 PM ET. You can watch Frankie race live on NBC Sports with coverage beginning at 6:00 PM ET. Be sure to follow Frankie on Facebook and Twitter to keep up with current broadcast times and all of Frankie’s racing news.