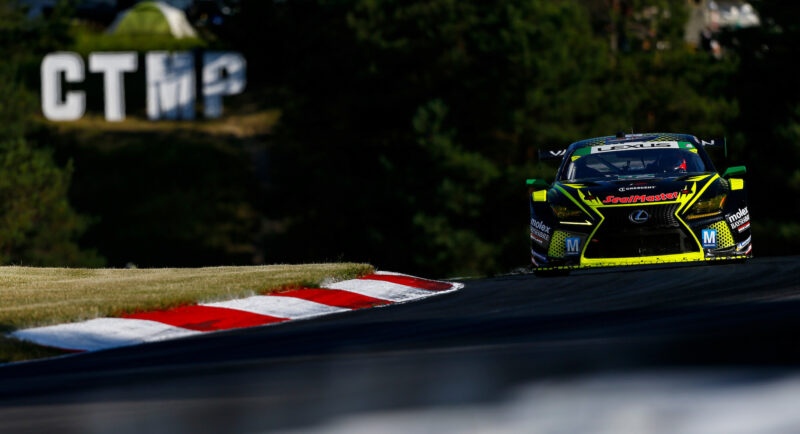 When Montecalvo took the green flag, he got an incredible jump on the Porsche that led the GTD field overall. However, two cars in the class ahead of the GTD cars tangled, spun and collected Montecalvo on lap one, turn one of the race. Montecalvo sustained significant damage but was able to limp the No. 12 Lexus RC F GT3 back to the pits.

The Vasser Sullivan crew immediately went to work to do everything they could to get the No. 12 Lexus back on track. The team did an incredible job to get Montecalvo’s Lexus repaired but, unfortunately, they went several laps down and would not be able to recover those laps by the end of the grand prix.

“It’s a shame that our weekend ended the way that it did. Canadian Tire Motorsports Park is my favorite track on the schedule, so I had high hopes for a win this weekend,” said Montecalvo.

“We were the car to beat all weekend, leading both practice sessions and qualifying on pole in the GTD class. I got a great start across the line, but unfortunately, two of the LMP3 cars just ahead of me came together. One car went spinning and clipped my right rear, and from there, I was just a passenger.”

“I was spun into the runoff area of turn one with significant damage to the right rear. I was able to get the car pointed in the right direction and limped my way back to the pits. I went straight to the garage where the team went to work.”

“The Vasser Sullivan crew did a phenomenal job to get our car repaired and back on track, but at that point we were several laps down and out of contention for a podium finish. The team deserved a win this weekend, so I’m disappointed that we weren’t able to come away with one. Aaron and I will be fighting as hard as ever to bring one home at Lime Rock next week.

The next race for Frankie will be the Northeast Grand Prix at Lime Rock Park on Saturday, July 16.  To stay up to date with current broadcast times and all of Frankie’s racing news, be sure to follow him on Facebook and Twitter.