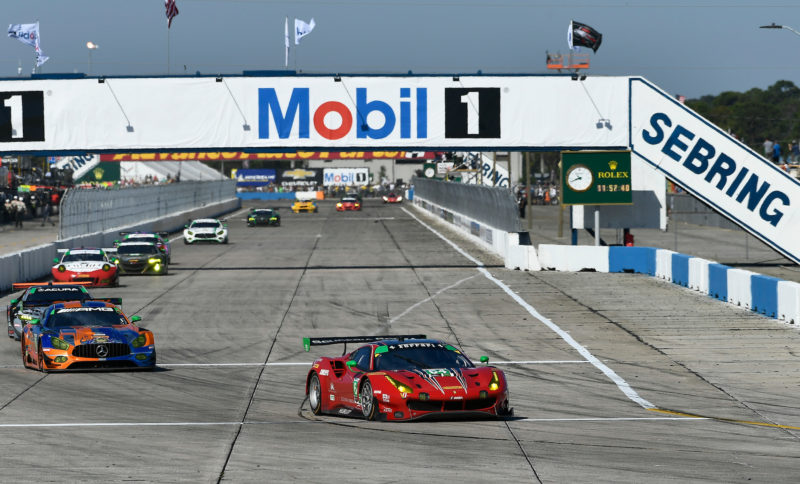 Saturday, March 17, 2018 – Sebring, FL – The No. 64 Scuderia Corsa Ferrari saw an early end to its 12 Hours of Sebring effort. Driver Frankie Montecalvo, who qualified the car P9 in class, started the race and immediately began to gain class positions.

Just under an hour into the race, the No. 52 AFS/PR1 Mathiasen Motorsports Ligier lost control in Turn 17. Montecalvo attempted to drive left to avoid contact with the prototype, but was clipped by the Ligier sending him and his Ferrari into the air and into the tire barrier where it landed on its roof.

Montecalvo was able to get out of the car under his own power and was sent immediately to the infield medical center where was he was examined and released shortly after the incident.

“It’s a very unfortunate end to our day. We definitely had a car that had the potential to run at the front of the pack, so I’m just disappointed to see it end this way,” stated Montecalvo.

“When I saw the prototype losing control in turn 17 I tried to go left to avoid him. I thought I was going to make it by him, but unfortunately the right side of his car clipped the right side of mine and sent me flying into the air.”

“That was probably one of the hardest hits I’ve ever felt when the car eventually landed on its roof, but it’s definitely a testament to the safety of the Ferrari. I’m so grateful to have been in such a solid race car and to be able to walk away from an incident like that.”

“I’m really bummed for Townsend and Bill and all of the crew because everyone has been working so hard to give us such a great car for the race. Thank you to Ferrari for making a car that can withstand that type of impact, and thank you to the entire Scuderia Corsa team for an outstanding job all weekend. I know we’ll get all the pieces back together and be back stronger than ever for The Glen.”