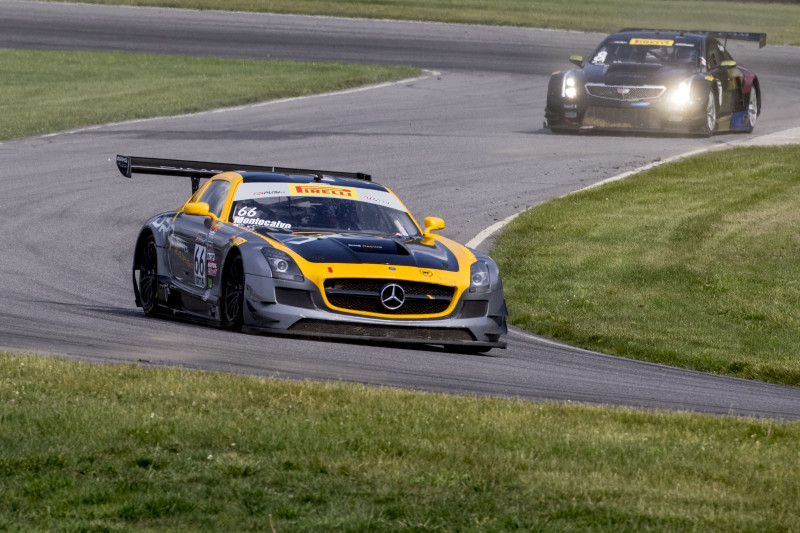 Thursday, June 23, 2016 – Highlands, NJ – After nearly a month break since racing at Lime Rock Park, Dime Racing driver Frankie Montecalvo is ready to get back to the track for Rounds 12 and 13 of the Pirelli World Challenge Championship at Road America in Elkart Lake, Wisconsin.

Despite a tough start to the season, the 2015 GTA Driver’s Champion is currently second in the driver’s championship with 798 points. Montecalvo put together a dominating second half of 2015 winning seven of the final nine races. His on track domination started with back-to-back wins last year at Road America, and now Montecalvo hopes to repeat history and drive the No. 66 Dime Racing Mercedes AMG SLS GT3 to victory on June 25 and 26.

“I’m really looking forward to getting back to Road America. The Mercedes does very well there, and it’s a track that I just love to go to. I love the area, the track itself is so much fun to drive and it’s definitely on my list of top five tracks in America,” said Montecalvo.

“The Dime Racing guys have been hard at work the last couple of weeks prepping the car for the weekend, and after almost a month since our last race at Lime Rock Park, I’m anxious to get the car rolled off the truck and on track for practice on Thursday.”

Montecalvo is hopeful that his fortune at Road America in the 2015 season will be present this weekend as he prepares to navigate the 14-turn, 4.048-mile road course that is Road America.

“Last year our season really took off at Road America. We had two back-to-back wins there, and then we went on to win seven of the final nine races. The Dime guys have been working really hard, and we’ve been so close to victory the last couple of races, so I think this is going to be our weekend. I can’t wait to get back to the track and see what we can do there this weekend.”

You can watch Frankie race LIVE on Saturday, June 25 at 5:30 PM EST and again on Sunday, at 10:55 AM EST on www.world-challenge.com/streamvideo.