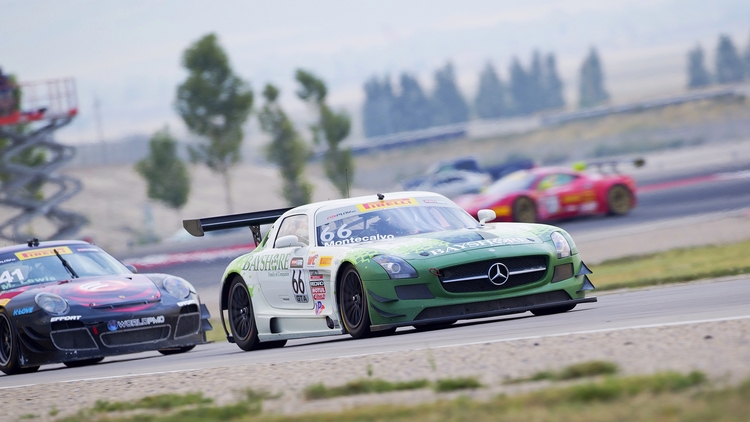 Wednesday, August 26, 2015 – Highlands, NJ – It was a perfect weekend for DragonSpeed driver Frankie Montecalvo as he swept the podium for Rounds 16 and 17 of the Pirelli World Challenge Championship last weekend at Miller Motorsports Park in Tooele, UT. Montecalvo, 24 of Highlands, NJ started the weekend P1 in both practices, qualified on pole and finished both races on the top step of the podium.

“The weekend started off great. We had a test day, which was nice to shake the rust off after not having been to Miller in so long,” said Montecalvo.

“Race two went well. We made some changes to try to make the car better for race two, but it didn’t necessarily make it better, it just made it a bit different, so I had to adjust my driving style a bit. But again, we really didn’t have any pressure from behind, so I drove a clean race, learned a lot about the car with a different set up and was able to come home with another victory. I can’t thank the DragonSpeed boys enough for giving me such a great car right from the start and throughout the weekend. Having my teammate Eric Lux on the podium for both races made the weekend even better, and now I’m really looking forward to getting to Sonoma.”

Montecalvo won’t have to wait long for Rounds 18 and 19 at Sonoma Raceway. On track activity begins Friday, August 28 and continues through Sunday. This will mark Montecalvo’s first visit to the beautiful 2.52-mile California track.

“Sonoma is the last track on the schedule that I have not been to. I’m really looking forward to running there, but definitely have some video to watch and research to do before I get there,” explained Montecalvo.

After his two race wins at Miller Motorsports Park, Montecalvo has taken the lead in the GTA points championship. With only three races left, Montecalvo and the DragonSpeed team are eager to get the race weekend underway and defend Montecalvo’s championship lead at Sonoma Raceway.

“I think this will be another great track for the Mercedes, and our strategy heading into the race is really the same one we’ve had all year – we have a great team and a great car and everyone just needs to drive smart and do their job out there. We know the car is fast and everyone has seen what I can do, so now it’s just a matter of getting there and executing a perfect race.”

You can watch Frankie LIVE at the following times:

You can also catch the re-air on CBS Sports network on Sunday, August 6 at 5:00 PM EST!